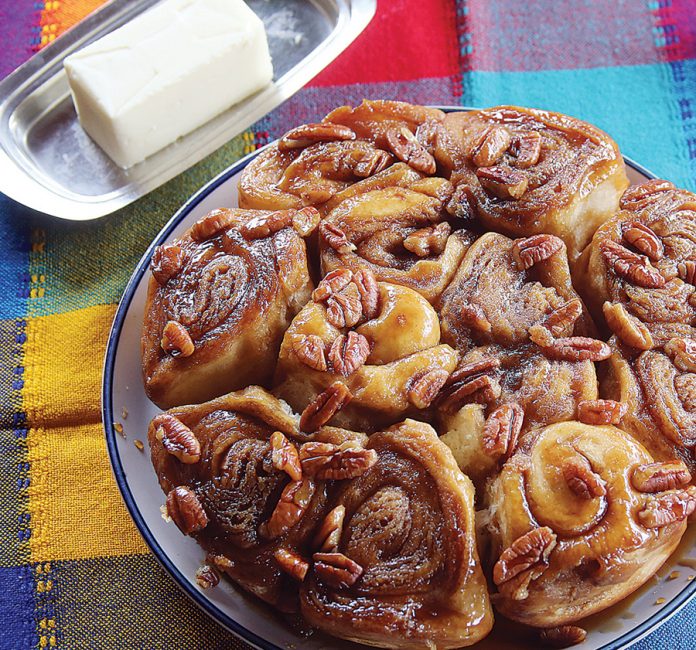 Have you ever watched a magician and wondered, “How does she do that?” I feel that way about food. Given the importance of food in our lives, references to it are almost everywhere although if you have ever read a Dan Brown book – “The Da Vinci Code,” “Angels & Demons,” or “Inferno,” to name a few – the main character frustratingly, never eats or sleeps, an anxiety-producing technique that promotes a speedy and hunger-inducing read.

This week’s recipe is a simpler imitation of a wonderful, gooey, pecan, schnecken made at Gayle’s Bakery and Roticcceria at 504 Bay Avenue in Capitola. Schnecken is German for snail, and describes the spiral shape of the bun. Although not quite as spectacular, this recipe is easy to make and can be mixed and assembled in the evening, then baked fresh for breakfast in the morning. It’s from the Epicurious cookbook and makes two, ten-inch round pans, enough for a big gathering. Cut the recipe in half for one pan of twelve buns, enough for four to six people.

Note that this is a yeast bread so you will need to set aside time for the first rising. But, after you assemble the buns, the second rising will be overnight in the refrigerator. Note also to not overbake the buns because burnt sugar will make them difficult to neatly remove out of the pan, and give you a bigger mess to clean up.

First, make the dough. In a small bowl, mix ¼ cup of warm water with a pinch of sugar. Stir in the yeast and let set for about 10 minutes until it is foamy.

In a large bowl or stand mixer, mix remaining sugar, butter, milk powder and salt. Beat in the eggs, one at a time, until you have a smooth mixture.

Add the rest of the warm water and the yeast mixture, and blend. Then add 3 cups of flour, one cup at a time. Mix well. Add about 1 more cup of flour until dough doesn’t stick to the sides of the bowl. Use the dough hook on a stand mixture or remove the dough from the bowl and knead for about 8 minutes until smooth, springy and supple. Add more flour as needed. Form into a nice smooth ball.

Butter a bowl. Add the dough and turn it once to coat the top. Cover with a damp towel or plastic wrap. Let sit until doubled in a warm place for about 2 1/2 hours.

Butter the cake pans generously. Beat the brown sugar, ½ cup of butter, honey, corn syrup and ¼ cup of water. Spread ½ of the glaze on the bottom of each pan. Sprinkle ½ of the pecans on top of the glaze.

Punch down the dough. Divide in half. Roll out each half into a 12 inch by 9-inch rectangle. Brush off any excess flour. Mix 4 teaspoons of sugar with the cinnamon. Sprinkle that over the rectangles.

Starting at the long side, tightly roll up the rectangles into 12-inch long roll. Cut each log into 12 rounds. Place the 12 rolls, facing up, in the cake pan. Repeat for the second pan. Cover with damp towel or plastic wrap and let rise until doubled for about an hour. You can refrigerate the unbaked rolls at this point and bake the next day. The next day, let the rolls come to room temperature before baking. If you don’t want to refrigerate the dough, let rise again for an hour before baking.

Preheat oven to 375 degrees. Bake the rolls until they are golden brown for about 30 minutes. Remove from the oven and run a knife around the sides of the pans. Invert the pans to remove the rolls. Let sit for 15-30 minutes. Serve.

Sarah Ringler is a retired schoolteacher. She worked as a cook for 8 years before being a teacher, and also taught a cooking class at Pajaro Middle School for several years. She comes from a long line of serious cooks and passed the tradition on to her children, grandchildren, students and, hopefully, her readers.

As people continue to follow federal, state and local shelter-in-place regulations during the Covid-19 pandemic, many have started looking for safe...
Read more
Arts & Culture