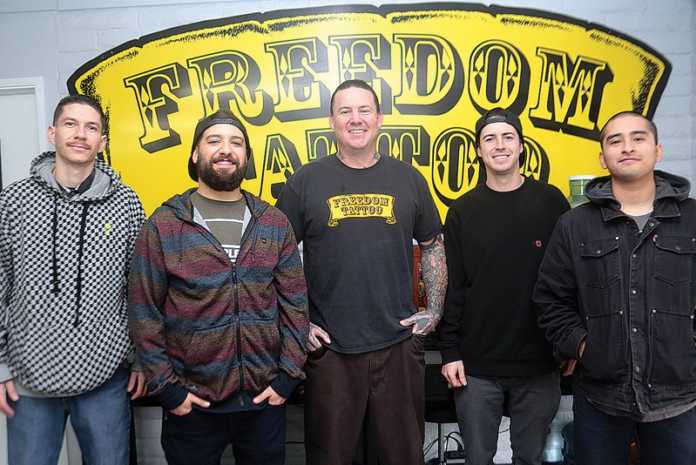 A new start in Aptos for Freedom Tattoo

APTOS — When Freedom Tattoo and Piercing opened in Watsonville a decade ago, they were the first tattoo parlor to come to the city.

Now, after moving to Aptos, they are once again the lone tattoo business in town.

“We were surprised,” said shop owner and manager Geoffrey Wells. “We thought for sure there’d be one here, but I guess they’re pretty concentrated in Santa Cruz. So it’s great we can be here for both Aptos and Watsonville.”

After Freedom Tattoo’s lease on Freedom Boulevard ended late last year, the business saw the opportunity to find a new space that was more suitable — and one they could have more control over.

Wells noticed an empty building at 9032 Soquel Drive, on the frontage road between the Rio Del Mar exit and Aptos Village, and stopped to investigate.

“It’s actually a slightly smaller space, but it has an open floor plan,” Wells said. “We now work together side-by-side. It’s great.”

Tattoo artist Nolan Hatton explained that it took a lot of effort to convert the new space.

Freedom Tattoo’s staff consists of Wells, Hatton and three others. All expressed their gratitude for being able to work alongside each other so well.

“These guys are super talented and dedicated,” Wells said. “And they work really well as a team. We’re all on the same page here.”

For tattoo artist Rudy Hooven, tattooing is a unique form of expression that goes beyond the artist’s vision alone.

“Getting a tattoo is a big step,” Hooven said. “It’s an important part of someone’s life. I really like being part of that.”

Hatton, who grew up in Aptos, said he wants people to know that Freedom Tattoo is dedicated to quality.

“For us, it’s not about ego,” he said. “We’re not money-hungry. It’s all about making cool artwork and doing so as well as we can.”

Freedom Tattoo is planning to hold an official grand opening celebration sometime in March. Meanwhile, they are acclimating to their new space and trying to get the word out.

“Being in Aptos is definitely different,” Wells said. “But so far the community has been very welcoming to us. We’re excited for this next step.”

For information about Freedom Tattoo and Piercing, visit facebook.com/freedomtatts. To schedule an appointment call 662-1902.