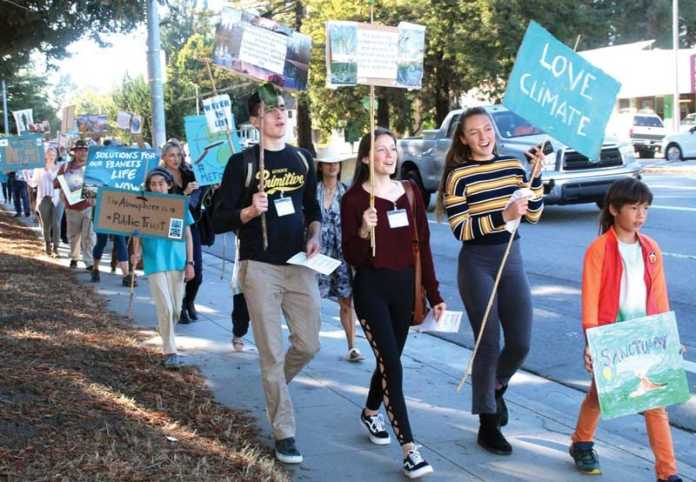 A show of support for climate change lawsuit

SANTA CRUZ — A large group of young people took picket signs in hand Monday afternoon and went on a short march near the Santa Cruz County Courthouse, a show of support for a federal lawsuit that could have a resounding effect on how the U.S. government deals with climate change.

This story began in 2015, when a contingent of 21 young people aged 11-19 known as Our Children’s Trust filed a lawsuit against the U.S. government, alleging that the government has long known about the potential catastrophic effects of climate change.

The case — Juliana et al v. the United States of America — further states that the government has ignored the science behind climate change. The result, the lawsuit alleges, will harm the environment, affect future generations and infringe “on plaintiffs’ fundamental constitutional rights to life, liberty, and property.”

The defendants in the case, which includes the fossil fuel industry, have filed five pretrial motions to dismiss the case, all of which have been dismissed.

The trial was slated to begin Monday, but about two weeks ago, the U.S. Supreme Court agreed to put a hold on the case as it considers the latest motion to dismiss.

Similar demonstrations occurred in every state in the U.S., said organizer Tanya Ridino.

“We want the kids who are suing the federal government to know that we hear them and support them,” she said. “They are committing their lives to this.

“We are waiting for the Supreme Court to make the ruling, and we are praying that they will make the right decision.”

Student organizer Camille Gamboa, 15, said she fears for her future and that of her peers if the world leaders do not reverse the causes of climate change.

“We’re not being left with a sustainable climate,” she said. “What’s going to happen to future generations?”

Cassie Mendivil, 11, said she fears how the changing climate will affect the world’s wildlife.

“I’m here because I care about the animals,” she said. “There won’t be many animals left if this continues.”

To see the lawsuit, visit bit.ly/2fCYMu7.

TODD GUILD - July 1, 2022
WATSONVILLE—Pajaro Valley Arts (PVA) will host a one-day conference on July 9 centered around the figure Our Lady of Guadalupe.  Attendees will explore the historic...