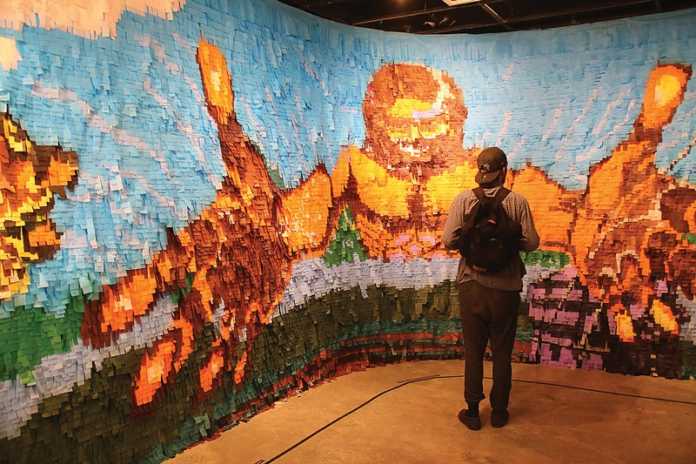 A symbol of community strength

SANTA CRUZ—A mural by UC Santa Cruz professor and artist Eduardo Carrillo in 1976 was only on display for three years in Santa Cruz before it was washed away and painted over.

Entitled “Birth, Death and Regeneration,” the piece was created on the interior of the historic Palomar Arcade by Carrillo and his students as a celebration of Mexican culture. It was also a statement about the incarceration of Chicanos at the nearby Santa Cruz County Jail.

But as of last week, a new version of the piece, entitled simply “Regeneración,” is on display at the Santa Cruz Museum of Art & History (the site that was the county jail in Carrillo’s time).

It was recreated by Las Vegas artist Justin Favela, who brought together other artists and community members to help rebirth the brief but impactful cultural landmark. Organizations such as DigitalNEST, Senderos and Community Bridges also joined in.

“We had people helping who were here during the original mural’s creation,” said Exhibition Catalyst Whitney Ford-Terry. “And then people who were just being introduced to Carillo and his work. It was great.”

Favela’s art style is created with thousands of tiny pieces of tissue paper, giving the look and feel of a piñata. He first projects an image onto a wall and traces the outline by hand. After choosing a color for each section, he begins to layer it with tissue.

In an artist’s statement for the Santa Cruz MAH, Favela drew attention to the importance and significance of murals to his culture:

“As Chicanos, Mexican-Americans, Latinxs, we don’t get to put up giant bronze monuments of our heroes as we please… our monuments are our murals,” Favela said.

“Regeneración” will be on display until October 20 at the Art Forum Gallery on the third floor of the Santa Cruz MAH, 705 Front St., Santa Cruz.

“It’s an incredible, immersive space,” Ford-Terry said. “I hope they can come away with an understanding of the impact of Latinx public art.”