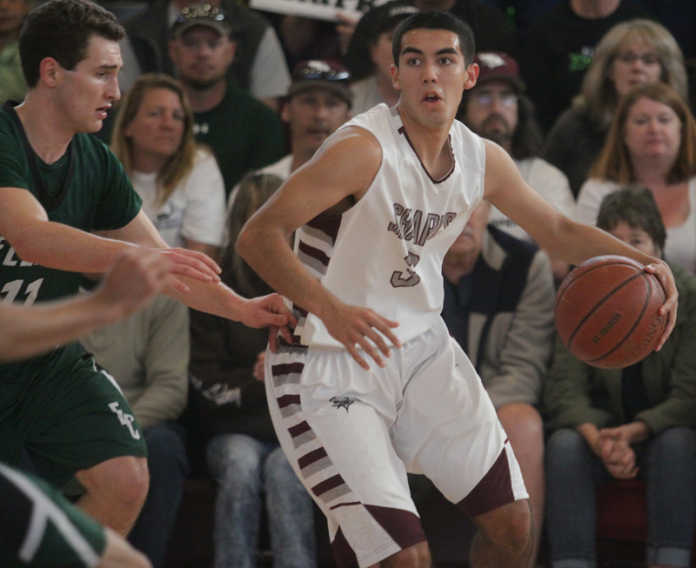 WATSONVILLE — The ball goes through the net to create a perfectly crisp swish. Sneakers rub against the hardwood forcing out constant squeaks. The crowd “oohs” and “ahhs” as a crossover dribble move freezes a defender in his tracks. The horn blares to let a player check in off the bench. The red lightbulbs around the backboard flash to cue the end of the shot clock.

For many, it is merely the everyday humdrum sights and sounds that come with the game of basketball. For St. Francis High senior point guard Sandor Rene Rodriguez, it’s a beautiful symphony of lights and tones.

When he jogs through the long hallway between the locker room and the St. Francis High gym and hears the buzz of the fans eagerly awaiting the Sharks, a cheek-to-cheek smile that is usually reserved for a 5-year-old on their first trip to Disneyland starts to creep in.

“Being able to run out there is such a blessing for me,” said Rodriguez, who admits to losing sleep while watching NBA highlights for hours before bed. “I just love everything about the sport.”

That passion was apparent this season in both his demeanor and play. Always cool, composed and in control, Rodriguez was a gigantic piece on a St. Francis team that — without a doubt — was the best the program has ever seen. For being the day-in-day-out vocal leader on that squad and for his constant solid play throughout the season, the Pajaronian is naming Rodriguez our Player of the Year for boy’s basketball.

The four-year varsity starter was named the SCCAL’s Most Valuable Player by the seven coaches from around the league after St. Francis completed its undefeated 12-0 regular season run and also won the end-of-season league tournament. He beat out a pair of teammates, junior forwards Jason Gallo and Chase Watkins, for the honor but said the award should’ve been split 11 ways.

“I, quite frankly, see an MVP in everybody on our team,” he said. “Everyone contributed. I think we were the most valuable team.”

Despite being only 5-foot-11, Rodriguez played like an unstoppable giant whenever he pushed the ball up the court in transition — with or without the advantage in numbers. In a flash, he was past the half-court line and already done surveying the defense. He could finish fast breaks himself with circus-style layups or fancy Eurosteps but usually capped them off with no-look or behind-the-back passes that sent the “Shark Tank” into a frenzy.

His mastery in the open court was just one of several skills in his wide-ranging repertoire. When the Sharks needed him to score, he did it in bunches. When they needed help on the glass, he peeled off his man and flew into the paint. When head coach Ed Kelly asked for a spark, he invaded his man’s space and forced turnovers.

“I’ve always been a team player,” Rodriguez said. “I’ll do anything to help the team win. It’s truly an honor to get these awards this year. I didn’t go into league saying, ‘I’m going for league MVP.’… I wanted a championship. Since freshman year, I’ve told myself, ‘I don’t want the awards.’ I want to focus on trying to get the banners. This year, to get four of them, that’s more of an accomplishment that I’m proud of.”

After starting the season at 7-2, the Sharks reeled off 23 straight wins en route to the Golden 1 Center in Sacramento for the CIF D-V State Championship game. During the winning streak, St. Francis exacted a double dose of revenge, beating Santa Cruz High and Woodside Priory — two teams the Sharks had lost to last season in heartbreakers — for the SCCAL Tournament Championship and CCS D-V Championship, respectively.

They finished agonizingly short of the CIF D-V State Championship, losing to R.H.P. by one point, but Rodriguez said the experience of playing in the NBA arena and the season-long journey more than made up for it.

“I’m still digesting it but it is what it is — I can’t dread about it the rest of my life,” Rodriguez said. “We got to move on. It was an amazing season. I still would not change a thing.”

Rodriguez said he plans on playing basketball in college but has not found the right fit yet. He does have dreams of playing in the NBA but also said he has dreams of getting an education in kinesiology, opening up his own gym with a basketball court and training/rehabbing professional athletes.

“I’d be around the game still and I’d be helping people,” he said. “That’d be something I’d love to do.”

OFFENSIVE PLAYER OF THE YEAR

He was named an All-SCCAL First Team selection after also averaging 6.3 rebounds, 1.5 assists and 1.5 steals in 26 minutes per game.

COACH OF THE YEAR

• Ed Kelly, St. Francis – Over the years, St. Francis head coach Ed Kelly has had his share of solid teams but this year’s group was special.

The Sharks lifted four banners into the rafters this season — winning league, CCS and NorCal titles, while also placing runner-up at state — and finished with a 29-3 overall record.

Kelly was named the SCCAL’s Coach of the Year.

• Gallo, an efficient 6-foot-5 rebounding machine, garnered consideration for the SCCAL’s MVP and with good reason. He averaged 14 points and 9.4 rebounds in 25 minutes per game, while shooting 53 percent from the field and 44 percent from 3-point range. He also shot 82 percent from the free-throw line.

Gallo earned a spot on the All-SCCAL First Team.

• Aptos High’s 5-foot-11 junior guard Rashaun Wooden could score with the best of them, averaging 11.5 points per game while also pulling down three boards per contest.

Wooden, who scored in double figures during his final eight games, helped the Mariners finish second in the SCCAL and earned a spot on the league’s first team.

• North Monterey County High’s senior forward/center Jeremy Heitzman was a bright spot for the Condors this season. The 6-foot-4 senior averaged 18.6 points and 12.8 rebounds per game, while also shooting 52.7 percent from the field.

He was named to the Monterey Bay League Gabilan’s First Team.

• Monte Vista Christian’s junior center Lucas Schmidt averaged 13.5 points and 12.6 rebounds per game for the Mustangs this season. The 6-foot-9 big man, who shot 51 percent from the field, was also a dependable passer and earned an All-MBL-G First Team selection.

• Few players from around the area surprised like Pajaro Valley High’s freshman guard Christian Quintero. The 5-foot-10 newcomer averaged 9.7 points, 2.7 rebounds and 2.1 steals per game and not only helped the Grizzlies finish second in the MBL-Pacific but als
o helped the program earn its first CCS playoff win since 2009.

He was named the Pacific division’s Freshman of the Year and also earned a spot on the league’s first team.