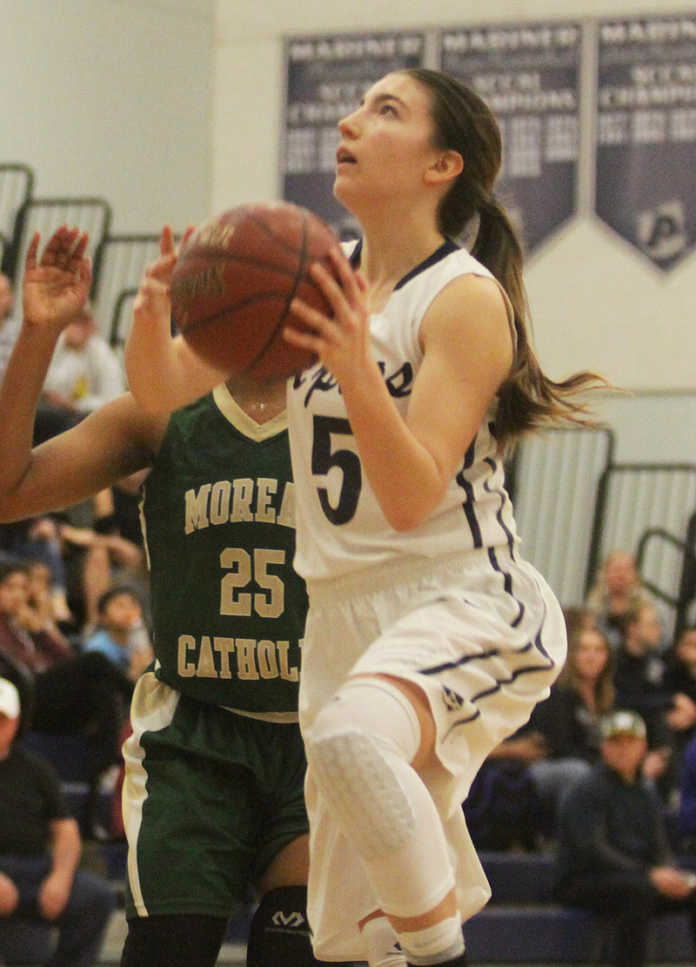 APTOS — Hannah Hocom crosses the half-court line during the first half of the Central Coast Section Division III championship game and is already calling for the ball. Her teammate, Gabby Giuffre, wisely obliges, dishing the ball to Hocom who’s set up five feet behind the 3-point line.

The Soquel High defender, despite being burned twice by Hocom for 3-pointers on back-to-back possessions, is sagging off a foot inside the arc. There’s only about six feet between her and the defender but for Hocom that’s too much space. In her mind, she’s the only person in the Santa Clara High gym.

She squares up and lets it fly.

Her father and head coach, Stefan Hocom, turns around with his arms crossed to look at assistant coach John Sotomayor. They both shake their heads and force out a grin, as the deafening cheers from the crowd rains through the gym.

“She is going off!” yelled a member of the Monterey High boy’s basketball team from the stands as he vigorously shook his teammate near him.

That short burst of unstoppable offense from the Aptos High guard, reminiscent to that of Golden State Warriors deadeye shooter Klay Thompson, was just one of several that made the sharpshooting sophomore a sight to see this season. When it wasn’t her shooting, Hocom was driving into the lane, finishing at the rim and getting to the free-throw line. Oh, and she wasn’t too shabby at locking down opposing guards either.

The Pajaronian is naming Hocom our Player of the Year for girl’s basketball.

Hocom, who was named to Santa Cruz Coast Athletic League’s First Team, was the difference maker the Mariners needed to capture their first CCS title since 1983. She also paced Aptos to a second-place finish in the SCCAL with a 10-2 record — the program’s best finish since the 2009-10 season.

Aptos upset three teams in consecutive playoff games, including top-seeded South San Francisco in the semifinals, to win the CCS Championship. The Mariners beat Soquel, 71-59, for the title.

“It was a little surprising because we were such a young team,” Hocom said. “When we first came together, I was thinking league championship, maybe, not CCS. I guess that wasn’t really in my mind. It was like, ‘maybe next year.’ We were such a young team. When we played Mills [in the quarterfinals] and we beat them I’m like, ‘wait, we actually might be able to get this.’”

She averaged 15.1 points, 2.3 rebounds, 2.3 assists and 1.8 steals per game, while shooting 41 percent from the field. Hocom hit 72 3-pointers this season, which ranked 26th in the state and fifth in the CCS, according to the stats kept on maxpreps.com.

Hocom said she started developing her knock-down shooting ability as an eighth grader under the tutelage of the trainer Darroll Phillips. Since then, she’s made several additions to her game.

As a freshman, she spent most of her time camped out behind the 3-point line but this season she was able to penetrate defenses and earn trips to the charity stripe, where she shot 77 percent.

She said her work with Phillips and the time on the court with her traveling team, the East Bay Xplosion, helped her evolve into a complete scorer.

“I played a lot of basketball,” Hocom said. “I played with my EBX team and then we traveled and played these really big teams. It’s not structured or anything. You just go. You just have to play. I think that kind of basketball really helped me this season. Just go, don’t worry about certain things in the offense or exactly where you need to be. I think [my] attacking was a lot better. My freshman year I kind of just shot 3s but this year I definitely improved on getting inside the key, being able to finish, get the foul and being able to make my free throws.”

Her basketball journey, however, started as a 7-year-old in the Basketball Jones Hoop Camps run by the late Gene Cotter. She was one of few girls playing against middle-school age boys. Her shots didn’t reach the hoop on her first day but being in that environment only made her work harder.

That competitiveness shone through down the stretch of this season.

Hocom scored in double figures in 11 of her final 13 games and averaged 16.8 points per game, while shooting at a 48.9 percent clip from the field. She poured in 25 points in the CCS Championship and scored a career-high 27 points in the Mariners’ California Interscholastic Federation NorCal playoff game against Moreau Catholic.

SENIOR OF THE YEAR

• Delaney Moore, MVC, C/F – Monte Vista Christian’s senior center/forward Delaney Moore had a much bigger workload this season after the Mustangs graduated a pair of four-year varsity starters in Avery Keathley and Donatella MacLeod. She handled the added pressure wonderfully.

The 6-foot-1 Moore led her team in every major statical category this season, averaging 17.8 points, 10 rebounds, 2.9 assists, 4.6 steals and 4.5 blocks per game. She also set the school record in points (33) and blocks (12) in a game, while leading the Mustangs to an 18-8 overall record and a second-place finish in the Monterey Bay League Gabilan division.

Moore’s 107 blocks this season were good enough for 15th in the state and 92nd in the country, according to maxpreps.com.

COACH OF THE YEAR

• Stefan Hocom, Aptos – Aptos High’s third-year head coach was finally able to break through with a youthful team, finishing second in the SCCAL and winning a CCS title.

At times, Hocom started four freshman or sophomores but was able to make up for their inexperience by putting them in the right defense and instilling confidence to take any shot they wanted on offense.

He was named the SCCAL’s co-Coach of the Year.

THE REST OF THE TEAM

• Aptos High junior forward Abbi Saxton was one of the vocal leaders that helped lead the team to the CCS title. She was named to the SCCAL First Team and did a little bit of everything, averaging 6.1 points, 9.3 rebounds, 3.4 assists, 2.8 steals and one block per game.

• Watsonville High junior guard Savanah Quintana was the leading scorer on a Watsonville team that finished with an impressive 16-8 overall record. She averaged 14.4 points, six rebounds and four assists per game. She was named an All-MBL-Pacific division First Team selection.

• St. Francis High junior guard Janiya Sevilla carried the Sharks to a 14-11 overall record and their fourth CCS Division V championship game in the last five years. She averaged 15.2 points and 3.5 rebounds per game. She sunk 57 3-pointers and shot 37 percent from beyond the arc. Both marks ranked in the top 10 in the CCS. She earned a spot on the SCCAL’s First Team.

• Aptos High senior guard Teal Maixner was a clutch and feisty player for the Mariners this season, averaging 8.4 points, 3.5 rebounds, 2.6 assists and 3.1 steals per game. Maixner was named to the SCCAL First Team.

• North Monterey County High junior center Jocelyn Cazarez was named to the MBL-Pacific First Team after helping the Condors to a second-place finish in the league and a 13-11 overall record. She led the Condors in scoring (11.5 ppg) and helped them notch their first CCS playoff win since the 2009-10 season.