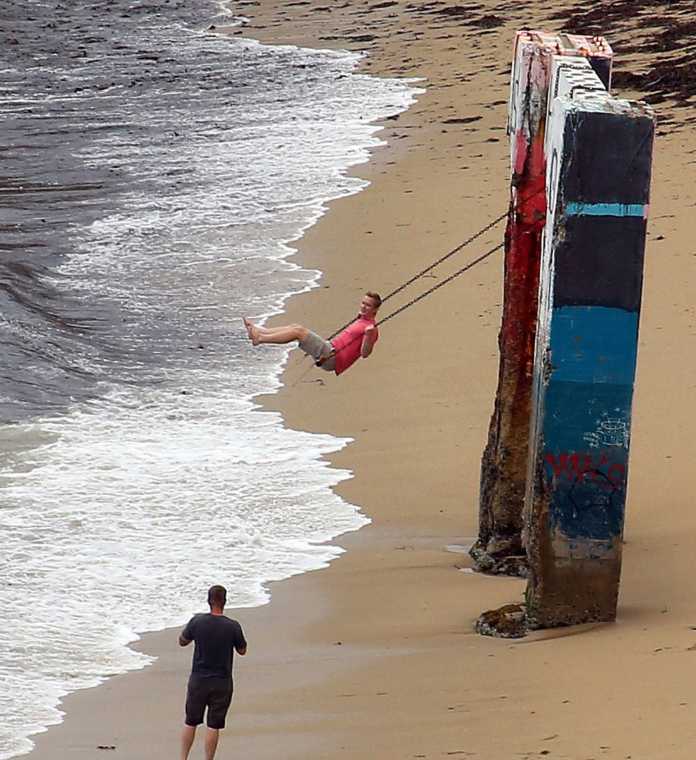 An easy jaunt to Davenport

Now that some of the summer tourist traffic has thinned down, my wife Sarah and I took the short 14-mile drive north on Highway 1 to Davenport recently. Like any day of the year, getting through Santa Cruz and out the west side door takes a while, but we were able to get onto West Cliff Drive, something I have had a really hard time doing during peak tourist season, and enjoy the rocky coastline and the fog-wrapped Monterey pines sprinkled along Lighthouse Field.

Once we hit Highway 1 the traffic was scant so we were able to relish the sprawling farmlands of Brussels sprouts and squash as we rolled north into the tiny coastal town.

The place was named after John Pope Davenport, a whaling captain, who headed up the construction of a shipping wharf that stretched out from the towering rocky cliffs. The history books say he built the pier to be used to help load locally harvested lumber onto ships. But since the 400-foot wharf was constructed near the mouth of Agua Puerca Creek, or Muddy Water Creek, it was vulnerable to stormy, rain-filled waterways that emptied tons of mud onto the shoreline, making it impossible for ships to approach. John Davenport went broke and left.

We pulled in front of the Whale City Cafe and were lucky to get the only table left in the crowded eatery, right at a window overlooking the busy highway. We both got a cappuccino and settled into the cozy colorful place that had an abundance of natural light, wood walls and a mix of locals and travelers.

Considering the short drive, we felt like we were in a foreign place, with all new faces, a new setting and plenty of new spots to explore.

Next, we wandered around the town along the hilly back streets off the highway. The place is packed with older-style wood cottages, dilapidated shacks and a sprinkling of fixed-up homes. We walked past Saint Vincent De Paul Catholic Church, its simple but majestic lines standing out against the rolling mountains and dried out the landscape. One street took us down a steep hill to Lundberg Glass Studio, which has been there for years. Next door was the closed down Davenport Mill, Custom Sash and Doors. The older building, for us, was a beautiful wood storyboard of times past. Next door I spotted a lengthy tall fence made of old doors and windows. The resident there said his family had once owned the Davenport Mill and he decided to build a “museum fence” with a bunch of doors and windows that were headed to the landfill.

We wandered across Highway 1 and followed a string of narrow paths at the top of the dramatic tall cliffs that face the sea. We noticed scores of people stretched out on their blankets enjoying picnic lunches on the cliffs. Some folks strung up hammocks between the wealth of trees.

Just to the south of the town are a bunch of unique rock formations, including Shark Fin Rock, an enormous outcropping resembling a fin at the edge of the surf.

Sprinkled into the fabric of Davenport are three restaurants, two art galleries, a post office, the long-standing Davenport Cash Store and the Pacific Elementary School.

One curiosity is the 1914 Davenport Jail. A brass plaque on it states that it has two cells and was used only twice from the time of its construction until it was decommissioned in 1936.

Davenport is also home to American Abalone Farms on the north side of town, which produces California Red Abalone in a network of buildings. Their abalone has been selected by the Monterey Bay Aquarium’s Sea Watch program as environmentally conscious seafood, their website states. Sarah bought some abalone steaks and a few oysters at the small store, which also features an outdoor deck where we noticed visitors dining on seafood snacks.

For us, this was an easy getaway, with minimal driving, effortless parking and a handful of interesting surprises not far from home.

Heading east to The Dalles | Travel