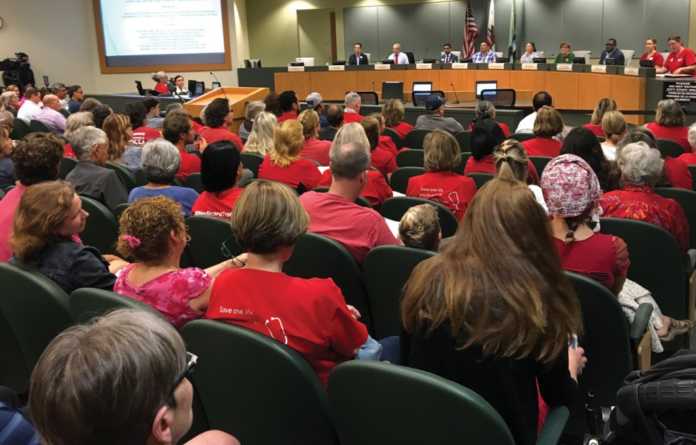 On Sunday, hundreds of community members came out to ask questions about the sale of Watsonville Community Hospital. Since then, we have learned the disturbing news that Halsen Healthcare has already hammered out an agreement with an Alabama-based, publicly-traded real estate investment firm, Medical Properties Trust (MPT), to sell the hospital. MPT is a multibillion-dollar real estate investment trust corporation (REIT) with assets around the world, and whose CEO made $13 million last year. REITs typically come in and buy the land and buildings, then offer the original buyers — in this case, Halsen Healthcare — an upfront amount of cash, which the operators could reinvest in the hospital, invest elsewhere or simply pocket. REITs have the power to charge exorbitant rents, terminate a lease with an operator, and to demand a portion of the profits. They are notorious for hiring an army of attorneys to fight with municipalities to get their property taxes lowered.

How disingenuous was it that the CEO of Halsen Healthcare, Dan Brothman, did not disclose the agreement he had made with MPT to the public when he showed up on Sunday? Instead, he presented Halsen Healthcare to a local tv station as a company made up of three men who were not beholden to shareholders. But with the sale to MPT, Halsen Healthcare is most definitely beholden to outside investors.

As the clock ticks down until Pajaro Valley Community Health Trust votes on whether to exercise its right of first refusal to take over the Watsonville Community Hospital, the nurses who organized the town hall want to make sure they address the questions raised by the public. While there were many question cards turned in on Sunday, three main themes emerged.

Many people, including Earl Lebow, asked: “If the trust were to exercise its right of first refusal to purchase the hospital where would the funds come from?”

We posed that question to Dori Rose Inda of Salud Para La Gente.

“If the community opposes the sale of the hospital to a for-profit buyer, the trust has the power to stop the sale and work with the community and community-based investors to develop a plan to pay for and operate the hospital. There are many options that could allow the community to benefit from the sale.”

Faris Sabbah asked: “What assurances does the community have that the hospital won’t be shut down or sold?”

Quiche Rubalcava, a registered nurse at Watsonville Community Hospital, had this response: “There are absolutely no assurances that if this hospital is sold to a for-profit buyer that it will not be shut down. We have seen across the country for-profit hospitals closed down and leave communities in crisis. We have seen hospitals closed so that the land they sit on can be developed into more profitable ventures. However, should the hospital become a nonprofit, it would have a responsibility to serve the people of Watsonville, and the public can ask the State of California to intervene if the nonprofit is not fulfilling its charitable purpose.”

“No, we only have hours, but this sale is not over until the trust approves it. This is a historic moment for Watsonville. The Pajaro Valley Community Health Trust has the power to return Watsonville Hospital to the community. The choice is between our hospital being locally run and controlled or ceding control to an investment firm in Birmingham, Ala. I remember the subprime mortgage crisis. That was brought to us by investment firms. It is clear to me that an investment firm in Alabama is not going to make decisions in the best interest of Watsonville. Health care for poor people will be less of a priority than profit.”

Malinda Markowitz - January 25, 2023
SANTA CRUZ COUNTY—Writer Stephen Kessler has been named the 2023 Artist of the Year by the Santa Cruz County Arts Commission.  Kessler has written a...