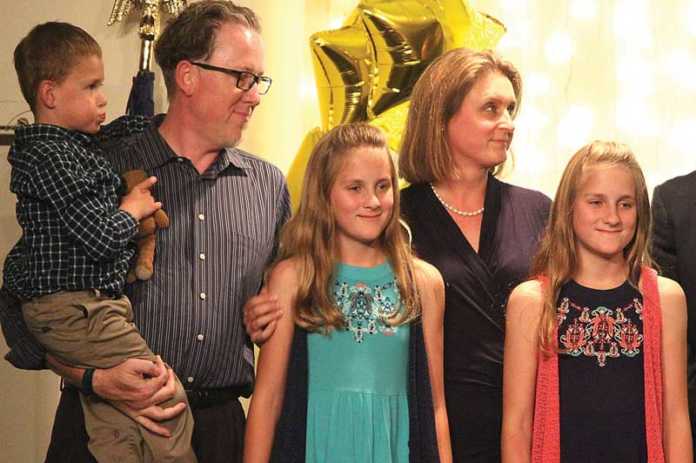 APTOS — In June 2016, the Santa Cruz Playground Project embarked on a two-year capital campaign to raise nearly $2 million for an inclusive playground.

Named LEO’s Haven, the playground, designed in a way so a child with a disability can play side-by-side with their friends, will be built at Chanticleer Park in Live Oak.

Now, as the group inches closer to its fundraising goal to make the playground a reality, LEO’s Haven was bestowed with the Aptos Chamber of Commerce’s Outstanding Achievement of the Year award on Friday night.

The Santa Cruz Playground Project was founded by the Potts family of Watsonville, who visited an inclusive playground for the first time in 2013 and witnessed their son Oliver, who uses a wheelchair, play together with his sisters Lauren and Evelyn.

LEO’s Haven, which is an acronym of the Potts siblings, was designed by nonprofit Shane’s Inspiration, based upon input from local children.

Since the capital campaign began, businesses, foundations, service organizations, and many other community members are stepping forward, said Tricia Potts.

“Our hearts are just overwhelmed by the generosity of the community,” she said.

Also during Friday night’s awards ceremony at the Seascape Beach Resort, Doug Deaver was honored as Man of the Year, and Kristin Fabos as Woman of the Year. The Business of the Year went to Rio Sands Hotel, while the Organization of the Year is the Advocates for the Forest of Nisene Marks.

Rounding out the list is the County of Santa Cruz Department of Public Works as Community Heroes.

Fabos, the director of Marketing and Communications at Cabrillo College, has 25 years of management and marketing/public relations experience. This past April, she, her husband Rye and a team of 15 others traveled to Lesotho, South Africa with Habitat for Humanity and built a house for a grandmother who was raising her four grandchildren. In 2009, Fabos volunteered outside of Nairobi, Kenya with the nonprofit group, the Kenya Orphanage Project.

Originally built in 1962, the Rio Sands Hotel has provided its meeting room facilities, free of charge, to various community and civic groups for many years. The property has hosted thousands of guests ranging from community forums, supervisorial updates, emergency planning and polling place events.

The Advocates for the Forest of Nisene Marks State Park, celebrating its 25th anniversary this year, is a nonprofit all-volunteer organization that supports the maintenance and improvement of the park. Once a month, volunteers head out onto the trails to remove obstructions, maintain drainage, and grade the trail surfaces as necessary.

Due to winter storms from late 2016 into early 2017, the County Public Works Department was faced with about 300 storm damage sites with estimated damages of $128 million across the county. Crews have worked around the clock to reopen roadways and repair damage, said Public Works Director John Presleigh.

ERIK CHALHOUB - August 11, 2022
Two local artists have teamed up to create a memorial sculpture honoring Watsonville residents who have died of Covid-19, and are asking for the...