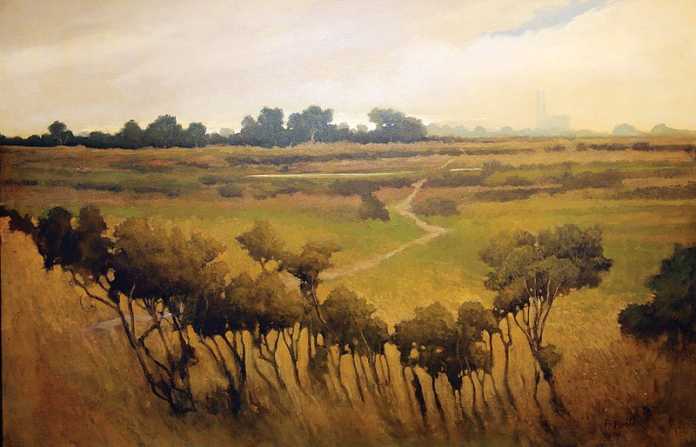 Art in the great outdoors

Susanna Waddell, curator of “Our Bounty,” recalls when she and a group of artists were driving up to Circle P. Ranch on Thompson Road. Suddenly, she said, an artist called out: “Hurry up, the fog is lifting!”

The group sped up, eager to capture the scene at its best.

Waddell said that it is that kind of moment that makes Plein Air unique.

“In some ways, they have to work fast,” she said. “They are dealing with the conditions, with changing light. At the same time, I’ve seen painters working from the exact same place for three days in a row.”

“Our Bounty” is the second show of its kind at PVA—the first, “Connecting With the Land,” took place in 2010, and was organized by Waddell and the late Mary Warshaw.

A total of 49 artists will display 171 of their works at the gallery beginning Wednesday. Oil, watercolors, pastel, acrylic and more are represented. The exhibit is broken up into the 11 different sites that the artists worked at. PVA had help from the community, especially Jess Brown of the Santa Cruz County Farm Bureau, in scoping out these locations.

“Santa Cruz County is a place that Plein Air artists are really drawn to,” Waddell said. “The natural beauty and diversity of the landscapes… there are so many options.”

Waddell is curating the show with Judy Cooper and Bruce Nicholson. In addition, PVA staff have been hard at work installing the pieces at the gallery, 37 Sudden St. in Watsonville. Tuesday evening a special artist’s reception will be held, with artists gathering and preparing for the show’s opening on Wednesday.

A public reception is scheduled for Sunday, 2-4 p.m.

“Green Houses” is an oil painting on board by Watsonville artist Charles Prentiss. (Tarmo Hannula/The Pajaronian)

Organizers also plan to create a catalogue of the pieces, including photographs and write-ups about the artists and their pieces, to be released by the end of the show’s run on Sept. 29.

“Plein Air: Our Bounty” is dedicated to the memory of Warshaw and UC Santa Cruz art professor Kay Metz.

“This is truly a celebration of South Santa Cruz County,” Waddell said.