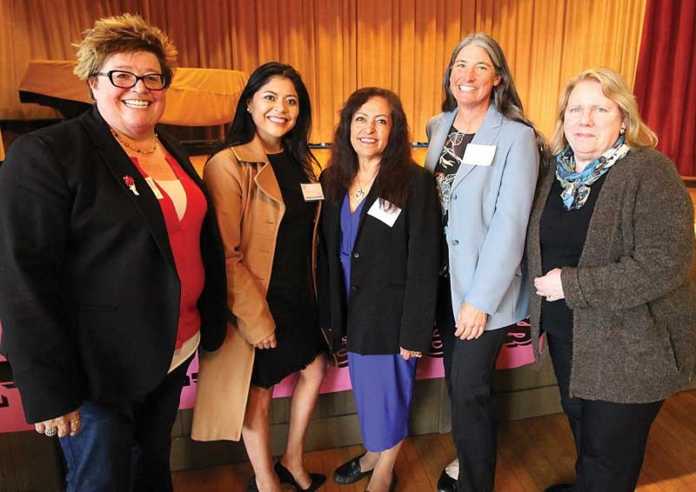 Blazing a path for women

WATSONVILLE — For 21 years, Maria Campos has helped women who are victims of domestic violence get through a difficult time in their lives.

As a domestic violence survivor, Campos said working with others who are in the same situation has helped her with the healing process.

“All the work I do is from my heart and my own personal experience,” she said.

Still, Campos said she was “in shock” when she found out she was one of six recipients of the Santa Cruz County Women’s Commission’s annual Trailblazers Awards. She joined Gina Gallino Cole as the two Pajaro Valley awardees honored during a ceremony put on by the Wonderful Women of Watsonville committee at the Watsonville Woman’s Club Tuesday afternoon.

The Trailblazers Award recognizes those who make efforts to improve the lives of other women and girls. The Women’s Commission asks members of the public to nominate those who they feel are deserving of the award.

“I hope the community gets more involved in education and prevention,” Campos said.

Cole has been involved in numerous organizations throughout the years, and currently serves on the boards of the Watsonville YWCA, Mental Health Client Action Network and Watsonville Recreation Advocates.

She said she was inspired to be active in her community from her father Ron Gallino, a former Watsonville High School teacher and coach who was one of the pioneering advocates of Title IX in the Pajaro Valley Unified School District. Title IX is a federal law that prohibits discrimination on the basis of sex in education programs.

“He always encouraged me and other girls that we could do anything we wanted to do,” Cole said.

Through her work at Pajaro Valley Prevention and Student Assistance, Cole is an advocate for programs and polices that limit tobacco use and exposure to secondhand smoke in the community.

“It’s a really great honor,” she said of the Trailblazers Award. “It was completely unexpected. I’m an under-the-radar kind of girl.”

Also during Tuesday’s ceremony, Luci Basor was sworn into the Women’s Commission by County Clerk Gail Pellerin. Watsonville resident Aurora Parker was also surprised with a cake to mark her 95th birthday.