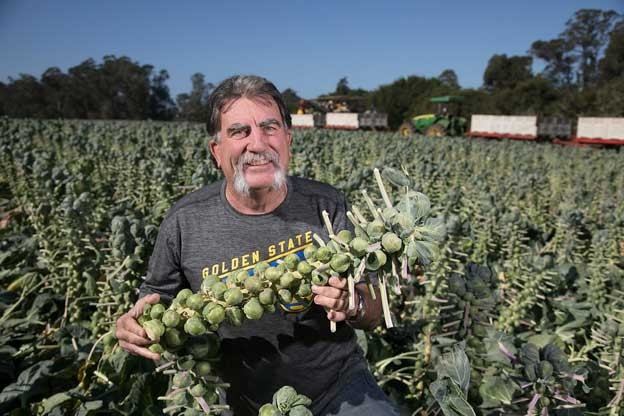 Bontadelli selected as Farmer of the Year

SANTA CRUZ — Steve Bontadelli has been selected by the Santa Cruz County Farm Bureau as the 2018 Farmer of the Year.

The award is presented annually to farmers who have contributed beyond their normal farming duties to help the community, according to the Farm Bureau.

Bontadelli was born and raised in Watsonville and graduated from Fresno State in 1997. He is a fourth generation farmer who began working for family farming operations in 1985.

Bontadelli helped create packing/shipping company Pfyffer Associates, which handles marketing of products produced by family farm and other area growers. He currently serves as general manager of the company.

The presentation was made during the Farm Bureau’s 101st Annual Meeting & Dinner, held at UCSC’s Cowell Ranch Hay Barn in Santa Cruz on Thursday evening. The board of directors said they felt it was appropriate to honor Bontadelli because of his leadership in the Brussels sprout industry, along with his involvement in the community, which includes countless volunteer hours, giving money and raising large sums of money for a variety of purposes.

The theme of Thursday evening was “Agriculture – North to South, Keep Santa Cruz Thriving.” A presentation on this theme was made by Thomas Broz, president of the Santa Cruz County Farm Bureau, and Daniel Press, professor of environmental studies and executive director of the Center for Agroecology and Sustainable Food Systems at UCSC.

Broz also highlighted some of the accomplishments of the Santa Cruz County Farm Bureau over the past year.

The Annual Meeting also included the election of new members of the board of directors.