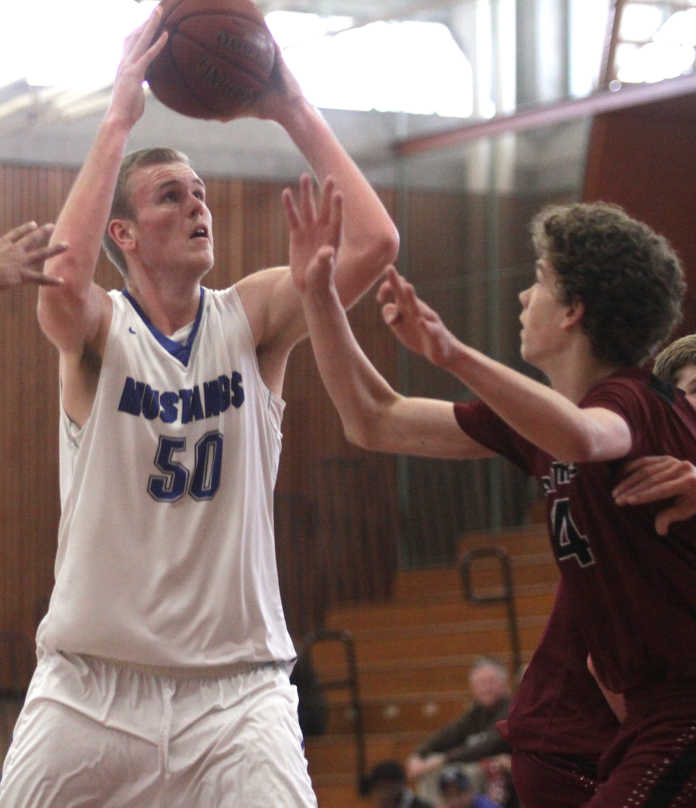 SALINAS — Monte Vista Christian junior center Lucas Schmidt was shaking his head as he ran back up the court.

The Mustangs had just played a solid defensive possession. They were physical with their man, fought over screens and closed out on the shooter. But Santa Cruz sophomore wing Robert Bishop still swished a 3-pointer to go up by 19 late in the third quarter.

“It was frustrating,” Schmidt said. “We could’ve played better on defense but their shots were falling.”

No. 5 Santa Cruz shot better than 50 percent from the field and made the right adjustments on defense to end the No. 4-seeded Mustangs’ season in the Central Coast Section Division IV quarterfinals with a 65-46 defeat on Saturday at Hartnell College in Salinas.

Santa Cruz (16-12) got off to a hot start with a 23-point first quarter and never looked back, leading by double-digits after every period.

Junior guard Miles Greene led the Mustangs (13-10) with a game-high 17 points and swished a 3-pointer early in the second half to trim the deficit to eight but the Cardinals called a timeout, regrouped and answered with a 14-3 run punctuated by Bishop’s make from beyond the arc.

Bishop had 15 points and junior point guard Max Dehart added 14, while senior bigs Henry Terrazes and Ryan Samuelson each chimed in with 12 for Santa Cruz.

“It’s a tough loss. We weren’t expecting them to hit all their shots like they did,” Greene said. “We were still trying to play hard but they were tough to stop. We didn’t think this would happen.”

Schmidt buoyed the Mustangs with 12 first-half points but was held without a field goal in the second half, as Santa Cruz, which advances to play top-seeded Half Moon Bay on Wednesday, clogged the middle of the floor with its zone defense. MVC’s 6-foot-9 center was met with double and triple teams throughout the night.

“It was a lot harder to get into the middle of the zone,” Schmidt said. “They were compressing the middle a little bit more. It made the outside shot a little more favorable.”

But MVC’s normally-reliable shooters struggled to make the Cardinals pay from deep. Greene and Schmidt, who finished with 15 points, were the only Mustangs in double figures on the night.

“We knew it was all or nothing coming into this game and even though we lost we still have next year for the juniors,” Greene said. “[We said] don’t let this loss hang over you. Just go work hard and come back another time.”

Schmidt, who started on last year’s CCS semifinalist team, called the year a success given the fact that the Mustangs had four new starters, nine new players and a brand new head coach in Hasan Houston.

Next season, however, Schmidt, Greene and the four other returning players plan on getting an early start on the season in the chemistry department.

“This last summer we were all separate and then we had to figure it out right before the season started,” Schmidt said. “We’re hoping to get together in the preseason and hopefully get more unified as a team.”