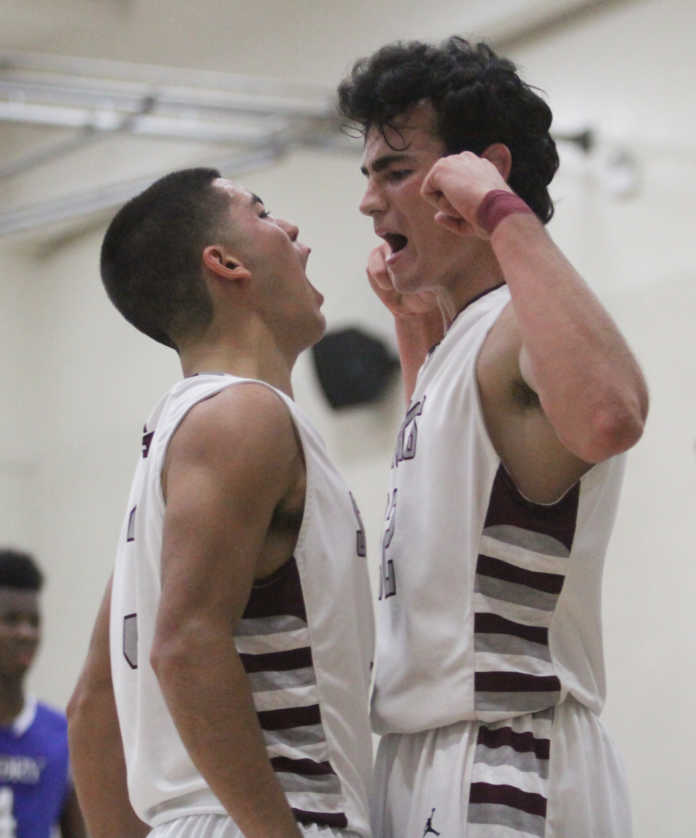 BELMONT — The St. Francis Sharks were missing something during the first half of Friday night’s Central Coast Section Division V Championship against Woodside Priory.

Something that had led them to the doorstep of their first CCS title since the 2009-10 season.

“Coach just said, ‘remember, have fun,’” said St. Francis senior point guard Sandor Rene Rodriguez. “It hit me. It was a new half and we’re going to do something different. We’re gonna play basketball and we’re gonna have fun.”

The top-seeded Sharks had plenty of fun over the final two quarters, as they surgically dismantled the No. 2-seeded Panthers, 61-39, at Notre Dame de Namur University in Belmont to win the program’s second-ever section title.

What was suppose to be St. Francis’ (26-2) biggest test of the season, turned out to be just another blowout victory. Priory (21-6), which entered as the two-time defending D-V champ, kept it close in the first half but the Sharks blew the doors off the Panthers in the third quarter, outscoring them 25-9 to grab a 19-point lead heading into the final stanza.

They extended their advantage to 27 in the fourth, as they could do no wrong en route to their 19th consecutive victory — 13 of which being of the double-digit variety.

“I’d love to say that there was some great x’s and o’s speech at halftime but, to be honest, my speech at halftime was ‘have fun,’” Kelly said. “There’s all kinds of crazy things to be worried about or upset about but this is a basketball game. Go out there and play and have fun. I really thought in the second half we took a deep breath and they played loose and they had fun.”

The undefeated and outright Santa Cruz Coast Athletic League champs had an answer for everything the Panthers threw at them. Priory tried to feed 6-foot-10 center Emmanuel Ajanaku-Makun in the paint but St. Francis’ 6-foot-4 forwards, senior Ruben Ibarra and junior Jason Gallo, did well enough when matched up one-on-one and the Sharks’ help defense crashed down superbly, forcing the Panthers’ big man to take tough shots.

After falling behind by double-digits in the third quarter, Priory subbed out Ajanaku-Makun, who finished with 10 points, and tried to smother the Sharks with a full-court trap defense. The last-resort adjustment backfired on the Panthers, as St. Francis, with its length and versatility, easily broke the trap and finished the third with a 10-point flurry that proved to be the knockout blow.

The Sharks got off to a slow start, going without a point for the first four minutes of the first quarter and only making one field goal in the frame. They trailed 6-0 to start and 10-7 at the end of the first but their offense started to find itself in the second.

Watkins gave the Sharks a 21-18 lead heading into the half by swishing a 3-pointer and also flashed a celebratory Draymond Green-esque double-bicep flex to the standing-room-only crowd after powering through a foul to finish a layup during the third quarter. He converted the three-point play at the free-throw line to put the Sharks up by double digits for the first time on the night.

It was one of many second-half highlights for the Sharks, who went from looking like the Washington Generals to the Harlem Globetrotters after intermission.

“We were playing so hard — too hard,” Ibarra said of the first half. “We were forgetting to have fun…We got back to what we know and, sure enough, it showed.”

Perhaps no other moment drew a bigger “ooh” from the crowd then when Rene Rodriguez stopped on a dime under the hoop on a fast break, sending the trailing Priory defender flying out of bounds and opening up an easy layup opportunity. Rene Rodriguez had a gigantic smile on his face as he jogged up the court and his teammates were still going crazy on the bench.

“We just told each other there’s one more half and as bad as we played we still had a three-point lead,” said Rene Rodriguez, who finished with 15 points, seven rebounds, six steals and five assists. “We just went out there and had fun. We knew it was going to be our half.”

It could very well be a preview of things to come for the Sharks, who will make their first California Interscholastic Federation NorCal playoff appearance since 2012 next week. And the road to the state championship game will go through Watsonville, as St. Francis, considered the No. 3 D-V team in the state by maxpreps.com, earned the top seed in Northern California. They will host No. 16 Fresno Christian on Wednesday at 7 p.m.

“The sky’s the limit right now,” Rene Rodriguez said. “We have so much potential — so much heart. We don’t want to lose. We just want to keep playing together and see how far we can take this.”