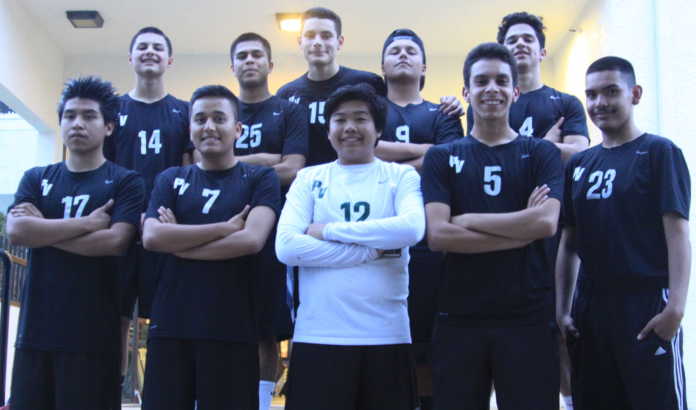 WATSONVILLE — In the days following a heartbreaking loss to Gilroy High, the Pajaro Valley High Grizzlies were sleepwalking through the second half of their Monterey Bay League Pacific division season.

Their hits were passable, their practices were only OK and their communication was unenthusiastic.

Pajaro Valley head coach Jamie Tsuji received late word that Gilroy had been upset by Seaside High in a five-set thriller and quickly relayed the info to her team. Her players’ eyes lit up and their spirits were reinvigorated. The Grizzlies’ march toward the program’s first-ever league crown was back on track and there was no way they were going to let it slip from their fingers this time around.

“They said we can’t lose,” Tsuji said. “They heard about Gilroy losing and they we’re like, ‘Oh, we’re on this.’ It gave them this redemption road where they’re like ‘we’re getting that banner.’”

They did just that.

The Grizzlies secured their first league title with a 25-21, 25-21, 25-21 sweep of the Monte Vista Christian Mustangs on Thursday night in Watsonville.

Pajaro Valley (20-10, 11-1) had clinched at least a share of the championship with Tuesday night’s sweep of Seaside High on Senior Night but the Grizzlies said they had no plans of sharing the title, especially since they controlled their own destiny.

“After we lost to Gilroy we thought it was done. We might get co-champs but that wasn’t enough for us,” said Pajaro Valley senior setter Ruben Garcia. “When Gilroy lost to Seaside were like, ‘we’re still in this.’ It just lifted up our spirits.”

The three seniors were the lone returners from last year’s team that finished in second place in the MBL-P behind cross-city rival Watsonville High. This season the Grizzlies had hopes of finally reaching the top of the mountain but hit a bump in the road on April 20 in the form of a disappointing three-set loss against Gilroy — their lone league loss of the year. But Pajaro Valley got help from Seaside just a handful of days later and then handled its own business by winning its final four league games to secure the title.

Betancourt, who was part of the Pajaro Valley team that won just two games during his freshman season, said the championship run is still a little surreal.

“There was a little bit of doubt at first because we felt pretty bad after that loss,” Betancourt said, “but we knew we had to improve, we had to come back up and we had to get things done.”

The Grizzlies will find out who and where they will play at today’s CCS seeding meeting.

Tsuji said her team was overwhelmed in last year’s CCS playoff game but added that her three seniors have been trying to prepare her youthful group for the jump in competition that it will see come next week.

“After the game they were already saying, ‘alright, now we have to get back to practice,’” Tsuji said. “They understand that they need to be focused in practice and practice hard to have a shot. The seniors have already discussed with the younger boys that CCS is the real deal. You need to be paying attention and doing your job.”

“It’s CCS,” Garcia said. “We know that we have to practice twice as hard now.”

And it’s that mindset that Tsuji said has set this year’s group apart from the rest. Despite carrying three sophomores and a pair of freshman, this year’s team has been Tsuji’s most determined and focused lot. Tsuji said the youth has actually helped the team, which she described as “hardworking goofballs,” stay even keel through the highs and the lows.

“They joke around and have fun in practice — they’re goofy,” Tsuji said. “But it’s a good goofy. It’s a productive goofy…practice is always entertaining to some degree. They work really hard.”