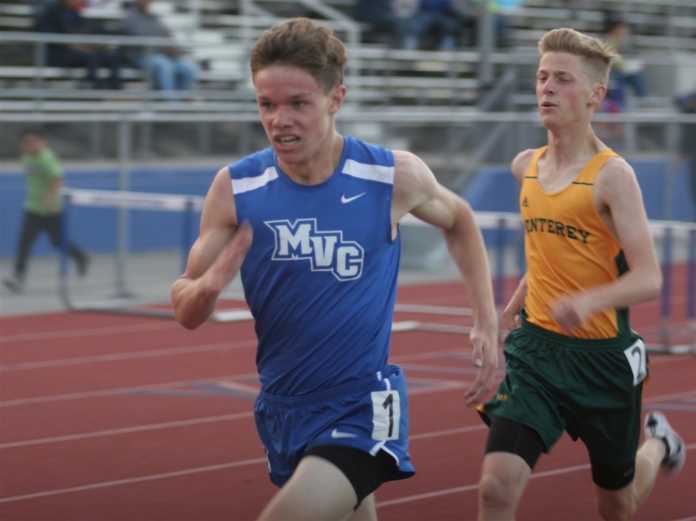 “Soccer is my main sport,” Bachman said, “but I came out here and I just fell in love with track.”

His affection for the sport grew a little more at Friday’s Monterey Bay League division championships.

Bachman won the Pacific division championship in the 800-meters with a time of 2 minutes, 6.08 seconds on the Gilroy High track.

Stuck in fourth place for the first half of the race, Bachman split a trio of runners during the final lap to secure the inside track to the division championship and a spot at next week’s MBL Masters Meet, which serves as the league Central Coast Section qualifier.

“I found a window in and I gave it my best,” Bachman said. “Those guys, we were battling out to the end. It was awesome. I really enjoyed that race.”

Bachman will return to Gilroy on May 11 to compete against the best the MBL has to offer.

Teammates Justin Lomeli, Hudson Mazza and David Wang will also return after helping the Mustangs’ 4×400 team to a second-place finish (3:38.01).

So too did Watsonville High senior Rolando Llamas. The Wildcatz’s top thrower continued his dominance of the Pacific division on Friday, winning titles in the discus and shot put with throws of 130 feet, 7 inches and 43-9.25, respectively.

“I’m pretty proud of myself,” Llamas said. “I’ve been practicing since the summer. To see myself use everything that I’ve worked on since the summer, it’s finally paying off.”

Pajaro Valley senior Luis Leonor finished second in the pole vault after tying his school record in the event (12-0).

N.M.C. senior Victor Martinez set a personal record in the shot put to extend his season by at least another week. He won the Gabilan division title in the event with a toss of 46-5.

Condors’ junior Konan Van Lear won the division title in the discus with a mark of 131-3.

Teammate Guy Gida also advanced to the Masters Meet with a third-place finish in the shot put (45-5.5).

Watsonville senior Jose Villanueva was second (40-5.5) in the Pacific division triple jump to punch his ticket to the Masters Meet.