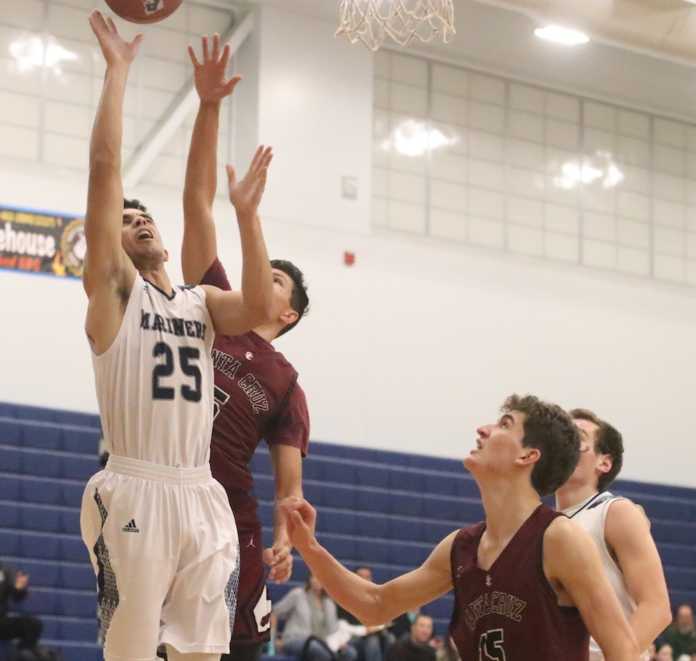 “I wanted to take the last shot,” Bishop said.

The senior forward finished with 23 points and six rebounds in what was the Cardinals’ (8-5, 1-0) eighth consecutive SCCAL victory dating back to last season, a campaign in which they won the league’s regular season and tournament title.

Jeremiah Elmore had a double-double with 12 points and 10 rebounds, and split a pair of technical free throws to ice the victory after Logan Feldbrugge buried a desperation 3-pointer to pull the Mariners (6-9, 0-1) within one with 1.6 seconds left.

Santa Cruz only led 34-28 at the half despite nailing seven 3-point shots.

Santa Cruz forward Robert Bishop had it working from deep in the first half. Cardinals hit 7 3-pointers over the first 2 quarters. pic.twitter.com/kTZWaAOhtn

The Cardinals pushed their advantage to 12 in the third quarter, but Aptos clawed its way back into the game behind defense and quick buckets in transition.

A layup from Hunter Matys brought the Mariners within three, and Feldbrugge split a pair from the free-throw line to cut the deficit to two with a little less two minutes left to play.

Aptos twice had a chance at the game-tying bucket, but turned the ball over on both occasions during the final minute-and-a-half.

Feldbrugge paced the Mariners with 23 points, hitting five 3-point shots. Matys added 12 points, three rebounds, three assists and a LeBron-esque chase down block on Bishop during the first half that produced “oohs” from the crowd.

Aptos will try to bounce back on Tuesday against Scotts Valley.