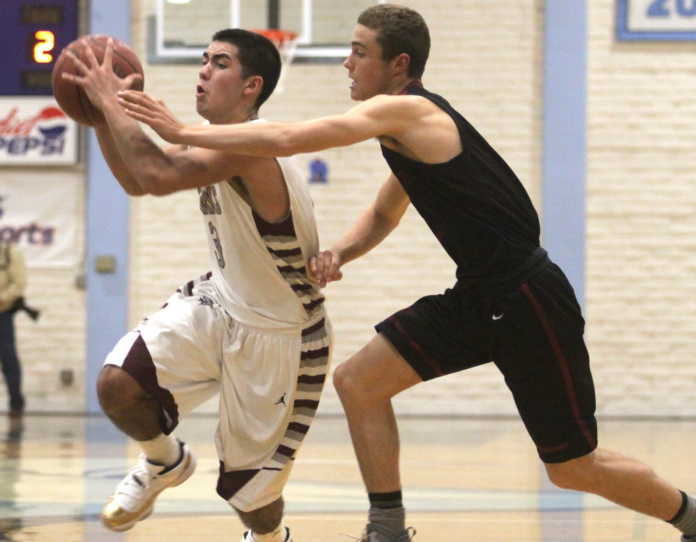 The St. Francis Sharks were that and then some all season long.

That stayed true on Saturday.

“The tournament is different than the regular season but it’s nice to win the tournament,” said St. Francis head coach Ed Kelly. “It’s an accomplishment for these kids to run the table. It’s something they can look back on and be proud of.”

St. Francis (23-2) becomes only the fourth team to finish the SCCAL regular season with a perfect record and also win the league tournament since the turn of the century.

Santa Cruz (15-12) was the only other program to accomplish the feat in that time, completing the run last season on a controversial buzzer-beater against the Sharks and doing so in back-to-back seasons starting with the 2003-04 campaign.

This time around the roles were reversed, as the Cardinals, who advanced to the championship game by knocking off No. 2 seed Aptos at Thursday’s semifinals, were trying to play the role of spoiler. But the Sharks, with their advantage in experience, speed and size, proved to be too much.

“There are no words that can describe this right now,” said St. Francis senior point guard Sandor Rene Rodriguez. “We’re just enjoying this one right now. I know in a few years from now we’ll look back at this one and know what we accomplished today.”

Rene Rodriguez stuffed the stat sheet with 14 points, six assists, five steals and four rebounds. He scored nine points in the first half and dragged the Sharks through a so-so start in which they turned it over 12 times and were beaten up on the glass.

The Sharks, winners of their last 16 games, including Thursday night’s 59-50 win over No. 4 seed San Lorenzo Valley in the tournament semis, led by seven at the break but had their lead cut to three midway through the third quarter before everything started to click.

St. Francis junior forward Jason Gallo drove through the lane for a tough layup to start the Sharks’ game-sealing, 20-1 run.

They held the Cardinals without a field goal for nearly six minutes and increased their lead to 22 in that time. Everything was falling for them on offense and deflections, steals and easy transition layups from their defense were aplenty.

They led by 24 points with a little less than two minutes before both teams cleared their bench.

“Defense,” said St. Francis junior forward Chase Watkins, when asked what led to the win. “That’s where it all starts. We get the stops on defense and we run it out and see what we can get…that’s our strength. We’ve got Gallo, we’ve got me, we’ve got Sandor, we’ve got Ruben [Ibarra], we’ve got all long and strong guys that can just run up and down the court and we try to use that to our advantage.”

Watkins scored a game-high 16 points, grabbed seven rebounds and rejected a pair of shots and Gallo added a double-double with 10 points and 10 rebounds. Ibarra chimed in with eight points and nine boards.

Every player saw the court for the Sharks, who had a few hundred fans pack the Cabrillo College stadium and let out celebratory cheers along with the players and coaches after the final seconds ticked off the clock.

Even Kelly, who is normally reserved emotionally, was all smiles and hugs after the historic win.

“We finally got one,” Rene Rodriguez said. “I know that [Kelly] and I, since my freshman year, have wanted one super badly. We’ve been close. I know that he wanted this one with this group of guys and I did too. Growing up with each other for a long time and to get these results, it’s unbelievable.”

A year after coming up one disputed shot short of claiming a share of their first SCCAL title since 2010, the Sharks entered this season as the presumptive favorites having graduated just one starter.

They shattered everyone’s expectations, winning nine of their 12 SCCAL regular season games by double digits and cruising to perfection on Saturday.

“It’s a long season and a long haul and it feels good to get over the hump,” Kelly said. “When you win the league in the regular season and then you got to prove it again, it adds a little bit to it. I thought the kids showed a lot of composure and a lot of grit to go out and beat people a third time.”

Now the Sharks will move on to the Central Coast Section playoffs.

They received the top seed in the Division V bracket on Sunday and will be off until Saturday’s quarterfinal round, which will take place at their home gym. They will meet the winner of No. 8 Nueva and No. 9 Oakwood.

It will be yet another gargantuan challenge for St. Francis, as the CCS has four of the state’s top 15 Division V teams, according to maxpreps.com. But the Sharks say they’re up for it.

St. Francis boy’s hoops gets No. 1 seed in CCS D-5 playoffs. They won’t play until Saturday, when they host the quarterfinals. #RPsports pic.twitter.com/6CuXsBrSiN

Rene Rodriguez said the Sharks can still get better and will need to do so before they return to the court on Saturday to start their quest for the program’s second section crown.

“We still haven’t hit our peak and in a way it kind of scares me because we’re damn good right now,” Rene Rodriguez said. “It’s on to the next one.”