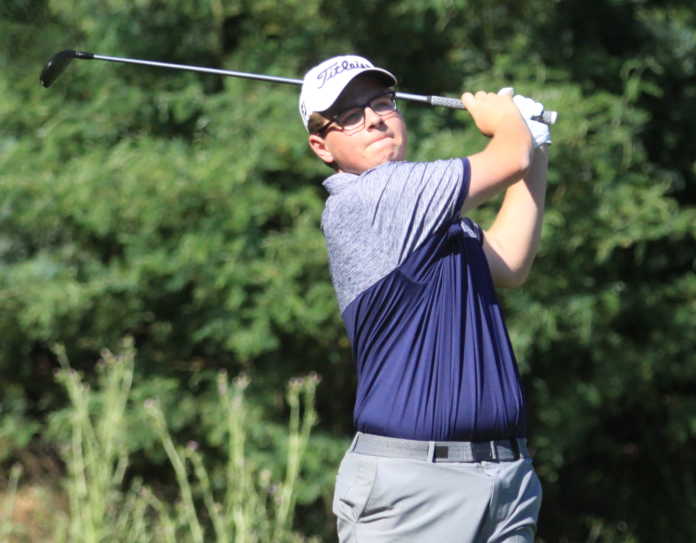 SANTA CRUZ — Everyone heard it. Some didn’t see it. But its impact was massive.

Santa Cruz High freshman Matthew Holcomb, believed to be one of the league’s bright young stars, sunk an ace on hole No. 18 to clinch the Santa Cruz Coast Athletic League Individual Golf Championship on Tuesday evening at Pasatiempo Golf Club in Santa Cruz.

Holcomb’s shot thumped on the green about 15 feet away from the hole, slowly rolled down the slope and found its mark, forcing out a loud-echoing cheer from the dozens of spectators in attendance watching the golfers from the six schools in the SCCAL funnel into the final hole.

Holcomb carded a 73. Aptos High senior Max Meltzer finished second, firing a 75. Scotts Valley High’s Ben Edens (77) and Aptos’ Adam McDonald (78) followed in third and fourth, respectively, and were the only two other golfers to finish under 80.

Meltzer, heading to NCAA Division I San Jose State next season, entered as the defending champ but couldn’t put on a repeat performance, as he struggled to keep consistent through the brutal course and hot weather.

“I was expecting more from myself, all-around,” said Meltzer, who finished with a trio of birdies.
Meltzer said he had trouble setting himself up with good opportunities on the green. And even when he did stick it near the pin, his short game, which led him to the title last season, was not to his liking.

Meltzer said the pressure of repeating as champ was not a factor during his round. He simply didn’t have the day he wanted to.

“I think anytime you do well it sets expectations,” Meltzer said. “You just have to temper your expectations sometimes.”

Meltzer got off to a tough start with a trio of bogeys on the first three holes but got back on track on No. 4 with his first birdie of the day. He finished the front nine with a 36 and started the back nine with a birdie but never really found his rhythm down the stretch, carding bogeys on No. 10, 11 and 14 and a double bogey on 16.

His smooth putt for birdie from about six feet away on No. 17 looked like it might have been enough to secure the title but Holcomb’s prayers were answered on the final hole.

Meltzer said he didn’t see Holcomb’s ace — he was adding up his scores from his card as the second quartet of golfers finished up its round — but he definitely heard the reaction.

“I didn’t get a good look,” Meltzer said, “but that was pretty cool, though.”

Meltzer and the two-time SCCAL team champion Mariners, who finished their league season with a perfect 10-0 record, will advance to the Central Coast Section Championships at Laguna Seca on May 9-10. Second-place Scotts Valley (8-2) also earned a spot at CCS, along with Holcomb and Harbor High’s Trevor Whiting, who edged Santa Cruz’s Paul Soeteart in a playoff after the two finished their round in a tie with a 90.

Both Meltzer and McDonald have golfed at Laguna Seca this season and said the degree of difficulty won’t be as high as Pasatiempo’s long, winding course. But, they added, the challenge will still be there.

“It’s definitely a course where you can score at,” said McDonald, a sophomore. “So we’re looking to do well as a team and hopefully make that second round.”