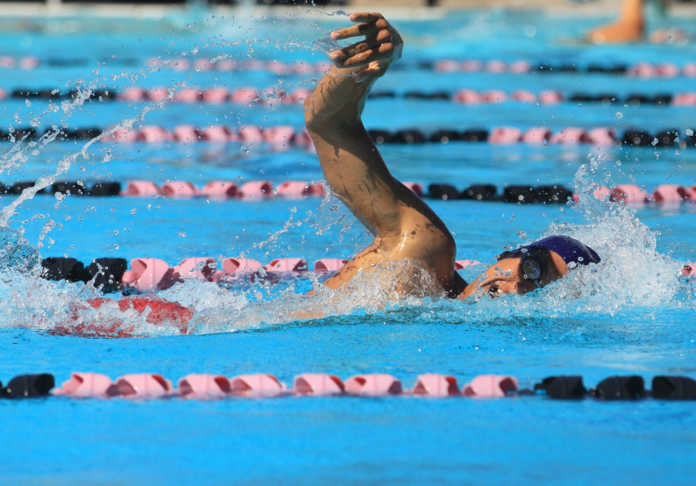 “I actually wasn’t very good when I was younger,” Clarke said, “but I just kept working hard, having good teammates to push me. It’s been going very good, so far.”

Clarke, who Aptos head coach Jim Triplett has called “the next big thing” since his freshman season, was better than good on Saturday at the Santa Cruz Coast Athletic League Swimming and Diving Championships.

Focused, relaxed and smooth, Clarke dominated the field each time he jumped into the San Lorenzo Valley High pool to help the Mariners four-peat as SCCAL champs. He picked up wins in the 500-yard freestyle and 200 individual medley with times of 4 minutes, 46.36 seconds and 1:57.12, respectively, and helped the 400 free relay and 200 medley relay to first-place finishes as well.

His times in the 500 free and 200 IM were both season best and easily qualified for the upcoming Central Coast Section Swimming and Diving Championships, which are set for May 12-13 at the Santa Clara International Swim Center.

It will be Clarke’s third trip to CCS. Last season, the Mariners’ powerhouse swimmer came up short of advancing past Friday’s preliminary rounds. Clarke, however, has much bigger hopes this time around.

“I’m hoping to come in the top eight in both my events. Maybe even top three and make it to [the California Interscholastic Federation State Meet],” said Clarke, who had marks on his back and shoulders from the previous day’s cupping therapy that helped him get into the right relaxed mindset for the final weeks of the season. “That’s the overall goal here.”

Aptos graduated the top high school swimmer in the county’s history in Christopher Staka, who rewrote the history books while winning multiple CCS titles and a CIF championship last season, but replaced his brilliance with an army of solid swimmers. The Mariners had 33 top-10 finishes over the eight individual events.

McGuckin won the 100 breaststroke (1:02.52) and was part of the winning 200 medley relay with junior Jared Hill, Clarke and Malone.

“This year we had a lot of depth,” Triplett said. “Last year we had some real stars. We still have a few but last year we had Staka — he was pretty amazing. You look at a lot of events where we had four people place in the top six or eight. That was the key.”

Getting a pair of freshman like Friedley and McGuckin, only helps.

“I knew that we weren’t gonna have Chris this year so I knew it was going to be really important to do well,” said McGuckin, whose time in the 100 breast was good enough to qualify for CCS. “I just tried to fill in any way I could.”