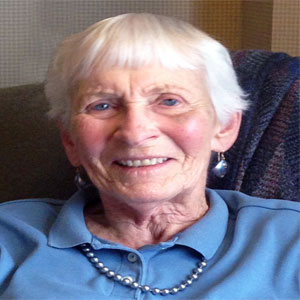 Brenda Ullman Schmida, known as Bunny to family and friends, left this earth on April 13, 2017, a week after her 89th birthday and surrounded in love by her husband and children. Bunny had successfully fought myelodysplastic syndrome for several years with a tenacity that surprised even her doctor! True to her spirit, she continued to live life to its fullest until just the last few weeks of her life.
Bunny was born at Hollywood Hospital on April 4, 1928. She grew up in Beverly Hills, the youngest of three children. Bunny’s lifelong love of animals was a hallmark of even her earliest years, and in almost every childhood photo, she is holding one of her beloved pets. In particular, she passionately loved her Dalmatian Josie, whose photograph still hangs in her home today.
After graduating from Beverly Hills High School in 1945, Bunny enrolled in UCLA as a pre-med major. She ultimately earned a bachelor’s degree and a master’s degree in occupational therapy from San Jose State University.
Bunny married her beau, Tom Schmida, in 1955. Tom and Bunny lived initially in Los Angeles, and Bunny worked at Sister Kenny Institute where she provided occupational therapy to polio survivors. After Tom and Bunny moved to Aptos in 1960, Bunny worked in the field of occupational therapy in many different capacities, including as an instructor at Cabrillo College, an instructor and coordinator at the Arthritis Foundation, at Community Hospital of Santa Cruz in Home Health, and as a relief therapist at Hillhaven Convalescent Hospital.
Tom and Bunny were founding members of St. Andrew Presbyterian Church in Aptos in 1965, through which they made life-long friends. Over the years, they enjoyed the baptism of children and grandchildren in the church, and even a family wedding.
One of Bunny’s greatest passions was her philanthropic work. After volunteering at the Natural History Museum in downtown Santa Cruz for ten years, Bunny became a Seacliff Docent in 2008 and spent many wonderful years volunteering at the Seacliff Visitor Center; she especially loved working with children at the museum. She also played a formative role in the early years of Wide Awakes, an Easter seals program that provides social and recreational opportunities for adults with physical and mental disabilities. One of her most fulfilling and cherished volunteer experiences was at the Cabrillo Stroke Center, where she taught and assisted with art and ceramic classes. When her failing health required her to leave this position, she said it was the one thing she missed the most.
Throughout her life, Bunny enjoyed travel. Among her travel highlights were hiking to the bottom of the Grand Canyon in her mid-20s with her college roommate, and a year or two later, bicycling and hitchhiking through post-WWII Europe on a ten-week trip with this same friend. Bunny told wonderful stories of these adventures, which included cycling in the pouring rain, being taken in by strangers and given food and lodging, and the challenges and amusements of communicating in a multitude of foreign languages. The trip culminated in their attendance as U.S. delegates at the First International Congress of the World Federation of Occupational Therapists in Edinburgh, Scotland. During their life together, Bunny and Tom took several trips across the globe, visiting among other places Russia, China, South America, Canada, Europe, Africa, and the Galapagos Islands, her favorite trip of all. The entire Schmida family spent a week every summer at the Ashland Shakespeare Festival, a tradition that Tom and Bunny enjoyed and maintained for almost 40 years.
Never idle, Bunny was a life-long learner. In addition to being an avid and talented gardener, she enjoyed a wide variety of other hobbies that included photography, basket weaving, jewelry making, leatherwork, knitting, cooking, and raising five boxer puppies.
Bunny leaves her husband of 62 years, Tom Schmida; her four children Leslie, Jennifer, Daniel, and Mary; and nine grandchildren. A memorial service will be held at a later date. Donations in celebration of Bunny’s life can be made to the Cabrillo Stroke Center. Mehl’s Colonial Chapel was entrusted with the arrangements.