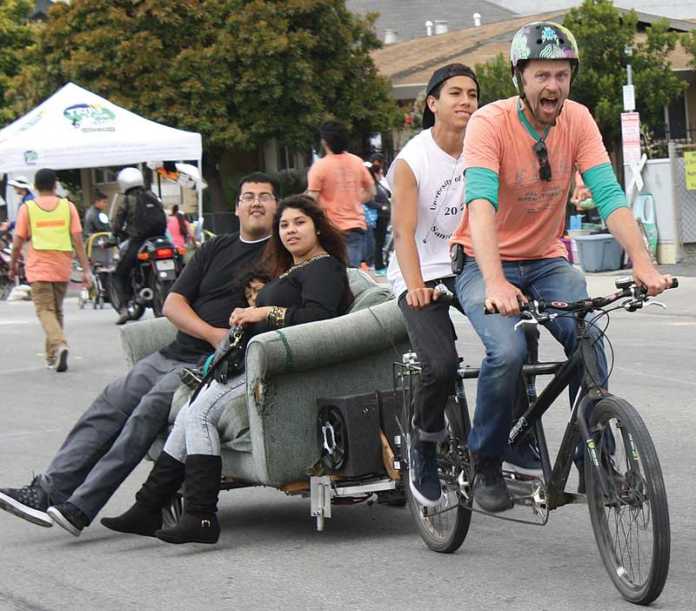 Sunday, on Brennan/Union Street between Callaghan Park and the City Plaza, the car-free community event will create a “pop-up park” where people can walk, bike, skate, dance and play in the street. The theme of the event is “healthy communities” and marks the first year that Bike Santa Cruz County has put on the event.

“It is open to everyone to come and get some healthy exercise, explore a variety of family-friendly activities, art, live music, educational outreach booths, or to just wander down the street,” Events Coordinator Julia Sinn said.

With Sinn behind the wheel for the first time since founder Saskia Lucas handed over the event, Sinn said this year it “may look a little different.”

Popping up throughout the country with some regularity since 1965 in Seattle, Open Streets events are designed to inspire new and inventive ways to achieve public health, environmental, social and economic goals. This year, Watsonville joins cities across the country and internationally that are opening streets to people to promote health, community and provide new recreational opportunities for residents.

In 2007 there were only 10 Open Streets initiatives in the U.S.; now there are more than 100 documented events.

“We are working to really make this a showcase of community assets, which is really what Open Streets is about,” Sinn said. “We want to get nonprofits, community groups and leaders invested in South County all year round and show resources for healthy living.”

The event is free and open to everyone, and while the designated stretch of road will be temporarily closed to cars, there are two Highway 152 crossing points at East Lake Avenue and East Beach Street, which will remain open to motor vehicle traffic.

“I’m excited about showing off the organizations that will help people, get them to engage with each other and have a good time celebrating the tradition of being out with your neighbors,” Sinn said.

The event will run from 11 a.m. to 3 p.m. with musician Sari Tah headlining at noon. Open Streets Watsonville is presented by Open Streets Santa Cruz County (OSSCC), a nonprofit community event program that launched in 2012.

The return of Open Streets is bringing in wide support from some city officials.

“When you go from North County to South County, there is a difference in culture,” City Councilman Felipe Hernandez said. “We don’t have the bike support that North County has, and it is good to expose bike culture to our residents.”

Citing a generational gap, Hernandez said today there is more of a video game culture then one of playing outdoors, and hopes the event will expose children to bikes again. But the benefits do not stop with kids.

“If we can expose young people, it is a good opportunity because it can lead to a healthy lifestyle. But adults who don’t necessarily ride bikes can come out and realize they might enjoy riding leisurely,” he said. “They could walk away wanting to take more advantage of our levee system and the scenic trails that we have and get outdoors. Really be able to enjoy our natural resources.”

For Sinn, she said she has high hopes.

“It’s not just about saving fossil fuels — it is building up the infrastructure so people feel a sense of safety and pride,” she said. “Working with the nonprofits and city council members and Public Works — they are so excited and enthusiastic about putting events like this on; it has given me a lot of optimism.”

Events like this, according to Hernandez, create a swell in demand for the supportive infrastructure that some of the more affluent cities have.

“We need to create a city that leads a more active lifestyle in both young kids and adults alike,” Hernandez said. “There is a perception that [biking] is an affluent thing, but there are a lot of Latinos who are part of the biking community.”

Attention on the roads and bicycle safety makes it so children can bike to school safely and promotes a pedestrian and bike friendly environment, Hernandez said, and that takes everyone.

“I’m pretty jazzed up about some of the stuff that is going on,” Hernandez said. “I even bought a bike for my mother for Open Streets.”

BEK SABEDRA - June 21, 2022
In the fall of 2013, Cabrillo College celebrated the opening of a remodeled and expanded Science, Technology, Engineering and Math (STEM) center in Aptos. After...