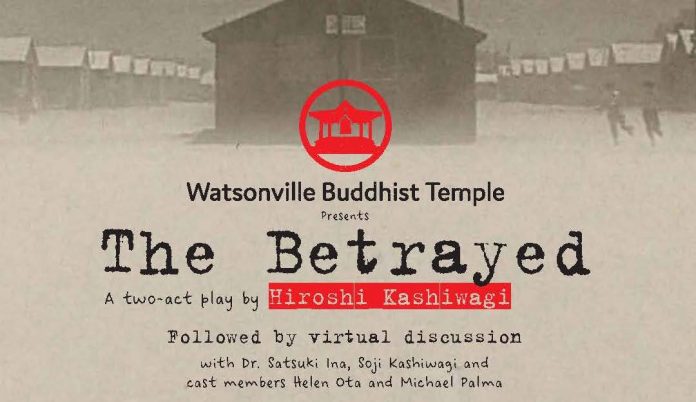 “The Betrayed” centers around a couple living at the Japanese-American concentration camp near Tule Lake, California in the 1940s. They become at odds when the controversial Loyalty Oath is put forward.

Temple Rev. Jay Shinseki said the timing of the fundraiser is perfect. May is Asian American and Pacific Islander (AAPI) Heritage Month, and is also the anniversary of when the Tule Lake camp opened in 1941.

Shinseki said the play is also important as hate crimes against the AAPI community have spiked during the pandemic.

“Today we find, in the midst of some terrible hate crimes and prejudices… [that it] is causing a divisive world,” he said. “It happened back then, it’s happening now. The play is about healing those wounds… [and] hopefully breaking down those divisions that are still felt today.”

Shinseki, whose own family was at Tule Lake, says he is looking forward to the event to better understand what people went through during that time. He hopes the local community will get the word out about the play.

“I would like people to tell their friends and family about this event,” he said. “I’m sure they’ll enjoy and get a lot out of it. We invite everyone to join us.”

Following “The Betrayed” will be a discussion with Kashiwagi’s son, Soji Kashiwagi and Dr. Satsuki Ina. Donations are $25 per person, or $50 per household. Ticket holders will receive an email with a link to the play 48 hours prior to showing.

This Week in Pajaro Valley’s Past, June 11

Tarmo Hannula - June 11, 2021
The RedBall Project, a global public art installation that has been to more than 30 cities since 2001, visits the Cabrillo College Watsonville Center...

This Week in Pajaro Valley’s Past, June 11