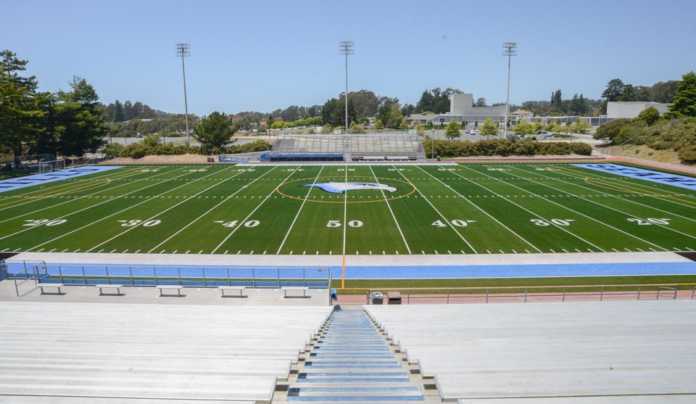 APTOS — The Cabrillo College athletics department recently made some much needed improvements to its sports facilities just in time for the new school year.

A brand new turf field was installed at Carl Conelly Stadium, while the old wooden bleachers inside the gymnasium were replaced with a more modern set.

“We’re constantly trying to find ways to improve our facilities, both for our students and our community,” said Cabrillo athletic director Mark Ramsey.

The cost of the new turf was $1.2 million and $220k for the bleachers, which now automatically retract instead of manually pulling them out.

Ramsey said the athletics department has been trying to chip away at some of the smaller projects, including the new field turf and bleachers for the gym.

“It definitely became a priority mainly because I really felt as the athletic director I could not allow another season of sports on that turf,” Ramsey said. “It was at end life and it was a liability. We really couldn’t continue using it.”

Ramsey said the wooden bleachers they replaced were at least 50 years old and not compliant with regulations for the Americans with Disabilities Act.

Ramsey said replacing the stadium turf was also critical because the old one was worn down and way past the warranty date, which is usually about eight to 10 years.

The previous turf was about 15 years old and Ramsey said the conditions kept getting worse, especially after the carpet started to rip.

Ramsey mentioned some areas of the turf had worn away so much that there was exposed hard material underneath, which they played through last season by covering with added material.

“It was a true safety concern for our student athletes as well as our outside field renters,” Ramsey said.

Cabrillo College spent $220k to replace the old wooden bleachers inside the gymnasium with a new set of bleachers that automatically pull out with the help of a remote control. (Juan Reyes — Pajaronian)

Cabrillo football coach Darren Arbet said the field looks awesome and the players are in love with the new look.

“I think it’s definitely going to help on our wear and tear on our players,” he said.

Arbet said the school felt like it was important to make the upgrades and they jumped on the opportunity to make it happen.

“Mark Ramsey and the president (Matthew Wetstein) did a great job putting everything together and making sure that it got done,” Arbet said.

Cabrillo women’s soccer coach Gladys Mondragon said the team is extremely excited to be playing on a new turf.

“It’s a new look for them, too,” Mondragon said. “They’re really motivated to go out there and perform.”

The previous field turf was installed in the summer of 2005.

The new field is a “Core” playing surface manufactured by FieldTurf, which is part of the Tarkett Sports Company. The fibers are produced in Germany.

The field turf is used by the Seattle Seahawks of the NFL and Seattle Sounders FC of the MLS.

The turf has a feature called CoolPlay Infill, which means all playing surfaces absorb heat energy from the sun and then release it back into its environment.

The added heat load can cause discomfort for players in warmer climates or on particularly hot days.

The cooling technology helps reduce the surface heat by up to 35 percent compared to traditional sand and rubber infill systems.

The system accomplishes this feat by adding an exclusive extruded composite top dressing to the CoolPlay system.

Unlike some competitive systems, CoolPlay requires no watering or irrigation to enable its cooling effect.

FieldTurf’s CoolPlay technology is trusted by the University of Texas at El Paso, Texas State University, California Institute of Technology and more than 200 programs in the United States.

Mondragon said it’s always nice for Cabrillo to provide the best facilities for its student athletes. She said the coaches and athletic department is always searching for ways to improve playing surfaces or equipment.

“We’re looking out for them as far as giving them the right tools and the right places for them to play on,” Mondragon said. “It’s really, really important for their safety.”

“Just from a health standpoint it’s gonna be huge for our football team,” Arbet said.

Mondragon said remodeling the stadium gives the school the opportunity to serve student athletes for years to come.

Mondragon said she believes the new turf will help with recruiting athletes to play for Cabrillo.

Arbet said he also thinks the new field can be used as a recruiting tool, which is what he’s been doing lure players to come play at Cabrillo.

“And how supportive our athletic department is and it really shows when they do stuff like getting a new football field for us. It helps a lot,” he said.

Mondragon said having new turf means the balls should roll faster. She said the players might have to adjust a bit on their touch passing and it feels a lot different running on it, too.

Mondragon said she’s thrilled and the team is motivated to break in the field.

“We’re definitely looking forward to giving out a good season for the whole community,” Mondragon said.

The first games to be played will begin Sept. 6 when the men’s soccer team takes on Redwoods College at 6:30 p.m

The football team will play against Contra Costa College on the following day at 1 p.m., followed by the women’s soccer team against Feather River College at 5:30 p.m.

Editor’s Note: This article will be published in the July 12 edition of the Pajaronian.