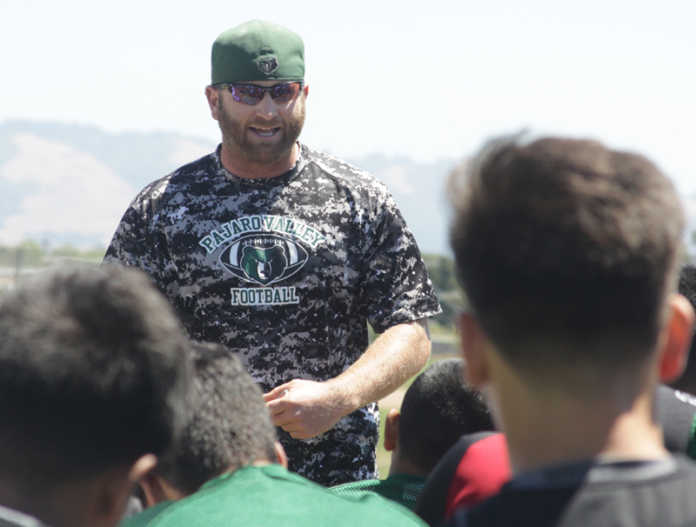 WATSONVILLE — Casey Neligh, the head coach of the girl’s basketball team at Pajaro Valley High, will resign from his position as a one-on-one special education teacher at the high school at the end of the school year and will no longer coach for the Grizzlies, he recently informed the Pajaronian.

Neligh said he resigned in order to pursue a master’s degree and teaching credential so that he can one day teach adaptive physical education.

“Pajaro Valley, the school, kids and administration, is beautiful,” Neligh said in a phone interview on Thursday. “I love everything about this place. I thought I’d be here forever and I mean that.”

Neligh not only served as the head coach of the girl’s basketball team over the past two seasons but was also the defensive coordinator for the football team during the last three seasons.

Pajaro Valley Athletic Director Joe Manfre said he was sad to see Neligh, who was one of his first hires, go.

“Casey knows basketball. He’s been around basketball for a long time but he had a good feel for the girls, too,” Manfre said in a phone interview on Thursday. “He’d never coached girls before but it was a quick adjustment for him. He really liked that group of girls that he had. He was good for the kids.”

Manfre said the opening for the position would be posted on edjoin.org, a website the PVUSD uses to promote jobs, in the near future.

“We’ll see what kinds of applicants we get,” Manfre said. “I hope that with the last few years of success we get some good ones.”

Neligh, a Salinas High alumnus, took over the girl’s basketball program a year after serving as an assistant under Andre Bailey, who guided the Grizzlies to their first-ever Central Coast Section playoff berth during the 2014-15 season. Bailey moved on to coach the boy’s team at Pajaro Valley following that season.

In his first season at the helm, Neligh’s team once again advanced to the CCS playoffs and recorded the program’s first-ever postseason win.

This season, Pajaro Valley struggled with injuries and missing players but showed a few flashes throughout the season, beating North Monterey County High and Alvarez High, which finished second and fourth in the Monterey Bay League Pacific division, respectively.

Neligh was brought on to run the football team’s defense by then-head coach Joe Gregorio in 2014. In his three years as the defensive coordinator, the Grizzlies went 9-21.

Newly hired head football coach Kevin Cordova said he is still in the process of putting together his staff — he has seven coaches committed after two weeks of searching — and hopes to be finished up in the next three or four weeks.

Cordova said it’s always tough to replace one of your top coaches, especially one that has the advantage of being on campus and being close to the kids.

“No matter what it’s never easy to replace an O- or D-coordinator,” Cordova said. “I rather not be doing it at this time of the year but this is how it is with young coaches. You never know how long they’re going to hang out. Some things come up with careers and they move on.”

Neligh said he has plenty of moments from his time at the school that he cherishes. Getting Julissa Quintana-Martinez to play football, winning a CCS game with the girl’s hoops program and the overall school spirit on the campus were all highlights.

“P.V. Nation really took off,” Neligh said. “It wasn’t about anyone else but us. It wasn’t about beating another school or anything like that. I’ve never seen school spirit like that. These kids were incredible.”