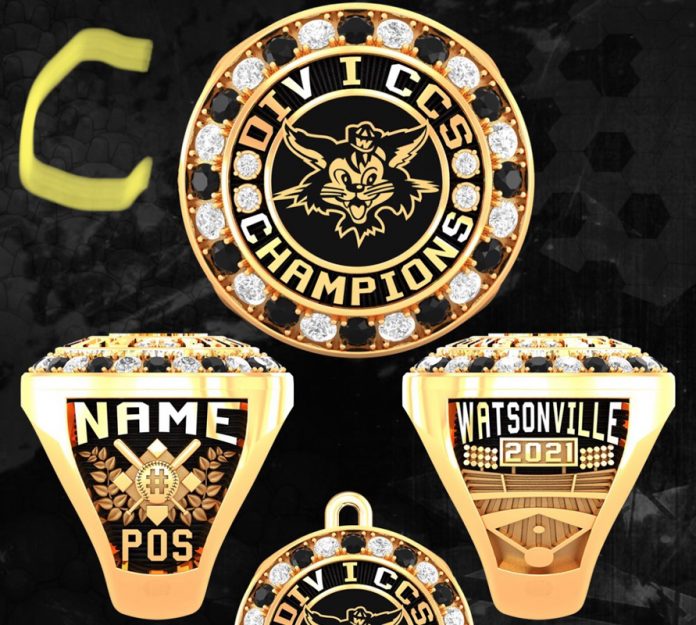 ‘Catz softball gets a glance at new championship rings

WATSONVILLE—The Watsonville High softball team is fresh off a Central Coast Section Division I title run. To commemorate their memorable season, the 2021 Wildcatz team will be presented with championship rings thanks to the fundraising efforts of a local group.

The rings will have a gold and black scheme, the same colors of the school’s sports teams.

“They’re really nice,” Senior pitcher Marissa Martinez said. “They have diamonds on the outside, we can put our last name, position … it’s pretty cool.”

The gold band will display their name and position in gold with a black background on one side; while the other side says “Watsonville 2021”, also in gold, hovering above a softball field. The top part has a black stone with Wille the Wildcat dead center, along with both clear and black stones and the words “DIV I CCS Champions” that circle the mascot.

Watsonville coach Scott Wilson told the team it was their choice, but he personally had a preference for the one the team decided on.

The Wildcatz are scheduled to receive their golden rings sometime in October.

The program needed to come up with $4,600 to buy them. Martinez said she thought they were going to have to pay out of pocket.

That’s when Barbie Gomez and the Girlz Squad walking group stepped in to help. They held a “stair challenge” in which 40 members walked up and down the 151 stairs at Seacliff Beach to help fundraise. The group, along with community members and businesses that donated prizes for a raffle, helped raise $4,940 to purchase the rings.

“We’re just everyday ladies in the community who’ve been walking for our own health and we figured we might as well do it and make a little bit of money,” she said.

Schacher said in an email sent to this publication that the Girlz Squad brings community members together for fun, fellowship and inspiration.

“Covid changed the course of fundraising for many nonprofits this last year, so when Barbie heard this she galvanized us all into action to benefit our community,” Schacher said.

Wilson and Gomez go as far back when they both attended Watsonville High. He graduated in 1988 and is a couple of years younger than Gomez. Since then, he’s always known her for being a selfless person.

“She’s one of the few that we have out there that really does put everyone else before herself and it’s unconditional,” he said.

Wilson said it’s nice that last year’s team is getting their set of rings, but he’s still a little bummed that the 2017 CCS championship team didn’t receive the same treatment. He mentioned that they didn’t have the same support at the time. But that has changed over the years as the program has become more successful.

“Now you have the community really supporting behind it, showing up to games and now coming together as a community to help get these girls what they’ve earned,” Wilson said.

Martinez said it shows that the community cares about the program.

“[Gomez] was the one who started the whole fundraiser but there were people from our community who contributed to it, too,” Martinez said.