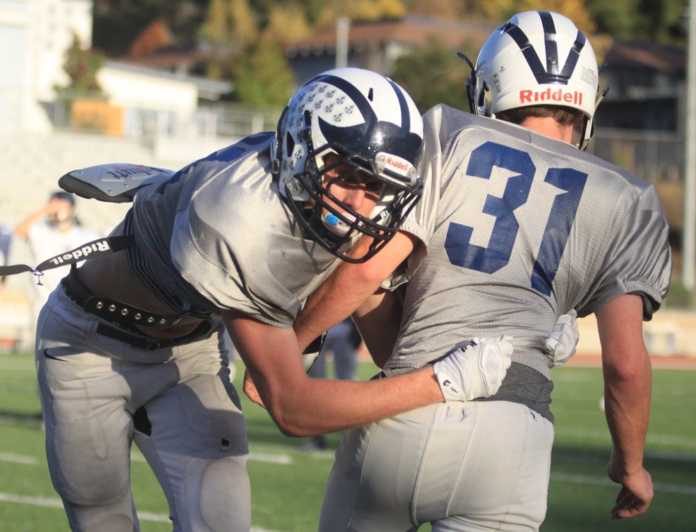 APTOS — The Aptos High defense has seen just about every offense imaginable this season.

A triple option right out of the 1960s? Been there. Seen that.

And none of them have been able to crack the Mariners’ tough shell for more than a few plays.

Friday, they’ll face yet another big test in the form of the pass-happy Terra Nova High Tigers.

The two teams are set to play in the first round of the section’s Open Division III playoffs at 7 p.m. in Aptos.

The No. 2 seed in the bracket, Aptos (7-3) will be the favorite over No. 7 Terra Nova (5-5) but the Mariners will undoubtedly have their hands full against possibly the best passing attack they’ve seen this season.

Tigers senior quarterback Nate Gordon has passed for more than 1,900 yards and 20 touchdowns, while completing close to 70 percent of his passing attempts. Additionally, receivers Jackson Kubal, Richard Walls and Scotty Tomei all have more than 30 receptions and 500 yards receiving on the season.

Yet the Mariners are not panicking and don’t feel like they have had to up the intensity in practice this week. After battling their way through the brutally tough Monterey Bay League Gabilan division to a second-place finish in their inaugural year, they feel plenty prepared.

In years prior, Aptos steamrolled through its Santa Cruz Coast Athletic League foes and won six straight league championships. This year has without a doubt been tougher and the Mariners feel they are better for it.

The Mariners have faced a primarily spread attack in each of their last three weeks of the season and the results have been so-so. In a 49-28 win over Monte Vista Christian, Aptos allowed close to 500 yards of offense. Two weeks ago, the Mariners did much better against Salinas High in terms of yards allowed — holding them to 298 yards — but gave up the most amount of points they had all season (31). Last week, however, Aptos was back to its usual dominant self, albeit against lesser competition, in a 42-0 rout of Alvarez High.

“In that regard, we feel fairly comfortable because it’s not anything new,” said Aptos defensive coach Greg Bjur. “We’re kind of fortunate. The teams we’ve played have gotten us ready for this.”

Both Blankenship and Bjur said Gordon resembles M.V.C. quarterback Sean White, who torched the Mariners’ secondary for 343 yards passing and a pair of touchdowns. The two coaches said White was able to find success because of the lack of an Aptos pass rush.

That will have to change if the Mariners, who played for a CCS championship in four straight seasons before last year, want to keep their section title hopes alive.

“The defensive line, I thought that would be a strong point like our offensive line but it hasn’t been,” Blankenship said. “But right now they’re starting to play the best that they’ve played all year. They’re playing fast.”

According to stats on MBayPreps.com, senior defensive tackle Hayden Chowning leads the Mariners in sacks with two. Senior defensive lineman Evan Carrillo says those stats are not complete and added that he and the rest of his teammates in the trenches have taken Blankenship’s recent challenge to heart.

“We’re ready for Friday,” Carrillo said. “He’s a good quarterback but a quarterback is only good if he can get the ball to his receivers. It’s on us.”

If Carrillo and Co. do manage to put some heat on Gordon, it would be a game changer for a defensive backfield that has been able to lockdown receivers despite the lack of a pass rush. Junior Shane Modena leads the team in interceptions with four and senior Blake Wheeler trails him with three.

Senior Desmond Mendoza has also played well over the Mariners final three games and junior Bubba Gallardo is expected to return from injury on Friday night.

Having Gallardo back in the fold is big for an Aptos defense that is expected to be missing a couple of players from its front seven.

“We’re not going to be fully healthy but we have the guys that can do it,” Blankenship said. “Those guys need to step up. All of them.”