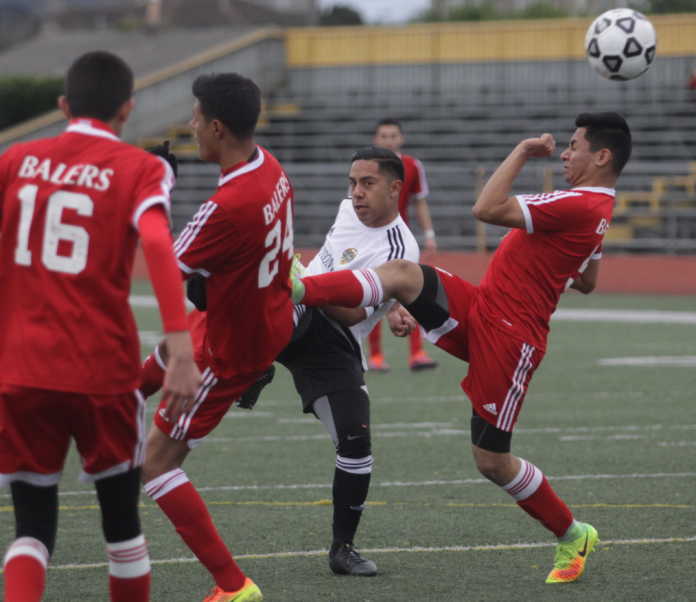 It took only two minutes for the Watsonville Wildcatz to take control of the match.

They never gave it back.

No. 2 Watsonville bounced No. 10 San Benito, 3-1, on Saturday at Emmett M. Geiser Field to advance to the Central Coast Section Division I semifinals.

The Wildcatz will play No. 6 Menlo-Atheron, which beat No. 14 Andrew Hill in overtime to advance, on Wednesday at Westmont High at 7 p.m. It will be Watsonville’s (13-6-3) fourth straight section semifinal appearance.

Junior midfielder Erik Herrera fired in a 40-yard strike off the top right corner of the goal on a free kick during the second minute to put the Wildcatz up 1-0 and five minutes later junior defender Ernesto Cruz found senior midfielder Armando Ferro for another score.

San Benito’s (10-6-5) Manuel Ceja sliced the lead in half in the 12th minute by cleaning up a misplayed corner kick but that’s as close at the Haybalers, third-place finishers in the Monterey Bay League Gabilan division, would come, as Watsonville added another score in the second half.

• Mountain View 5, Aptos 0 – The No. 7-seeded Aptos Mariners fell 5-0 to the nationally ranked and No. 2-seeded Mountain View Spartans on Saturday in the quarterfinals of the CCS Open Division playoffs.

Aptos, which won its fourth straight Santa Cruz Coast Athletic League championship this year with a perfect 12-0 league record, finished the season with a 15-3-1 overall record.