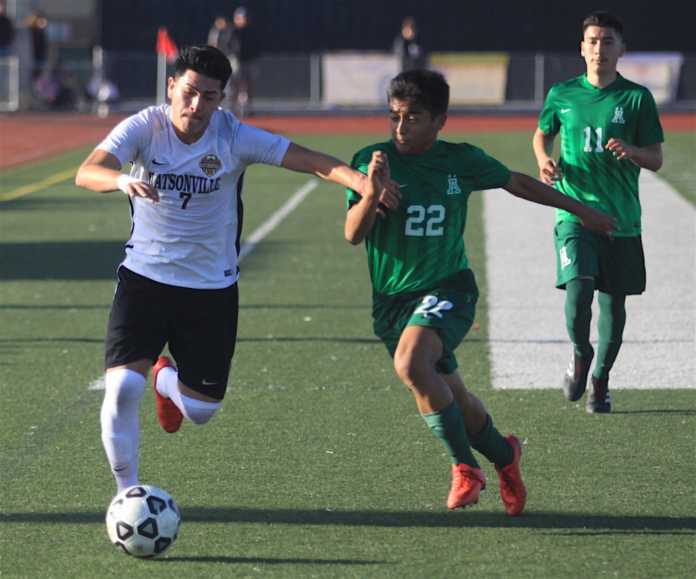 It will be Wildcatz vs. Wildcats in the quarterfinal round of the Central Coast Section Open Division playoffs.

Watsonville High received the No. 8 seed and will play at top-seeded Los Gatos High when the brutal division starts up on Saturday at 3 p.m.

A second-place finisher in the Monterey Bay League Gabilan division, Watsonville (12-4-4) finished off its regular season by winning four of five games, including its last two by a combined score of 6-1.

The 11-time CCS champions have reached a section final in each of the last four seasons, sharing a Division I title with Bellarmine in 2013-14 and the inaugural Open Division crown with Mitty in 2015-16.

The champion of the Santa Clara Valley Athletic League De Anza division, Los Gatos is undefeated at 16-0-2 and ranked 16th in the state by MaxPreps.

The winner between Watsonville and Los Gatos will play the winner of No. 5 St. Ignatius and No. 4 Overfelt High.

On the other side of the bracket, MBL-Gabilan division champion Alisal High picked up the No. 2 seed and will host No. 7 Los Altos High.

The winner of that game will advance to play the winner between No. 3 Mitty and No. 6 Burlingame High.

The four semifinalist of the Open Division will all advance to the inaugural California Interscholastic Federation Northern California regional championship.

The Aptos High Mariners will begin their CCS Open Division slate with a familiar opponent.

No. 3 Aptos High will host No. 6 Sobrato High on Saturday at 7 p.m. in the quarterfinal round of the prestigious division.

Aptos (13-3-2), fresh off capturing its fifth straight Santa Cruz Coast Athletic League title, has played Sobrato (11-2-6) in the preseason each of the last three seasons.

The Bulldogs, third-place finishers in the Blossom Valley Athletic League Mt. Hamilton Division, edged the Mariners in this season’s meeting, 1-0, in Morgan Hill in mid-December.

Since that loss, Aptos has cruised through the SCCAL by winning 11 of 12 matches, including its last 10.

The winner of the rematch will advance to play the winner of No. 2 Mountain View High and No. 7 Presentation.

On the other side of the bracket, Mitty received the top seed and will host No. 8 Menlo-Atherton.

No. 4 Pioneer and No. 5 Palo Alto will square off in the other quarterfinal.

The four semifinalist of the Open Division will all advance to the inaugural California Interscholastic Federation Northern California regional championship.