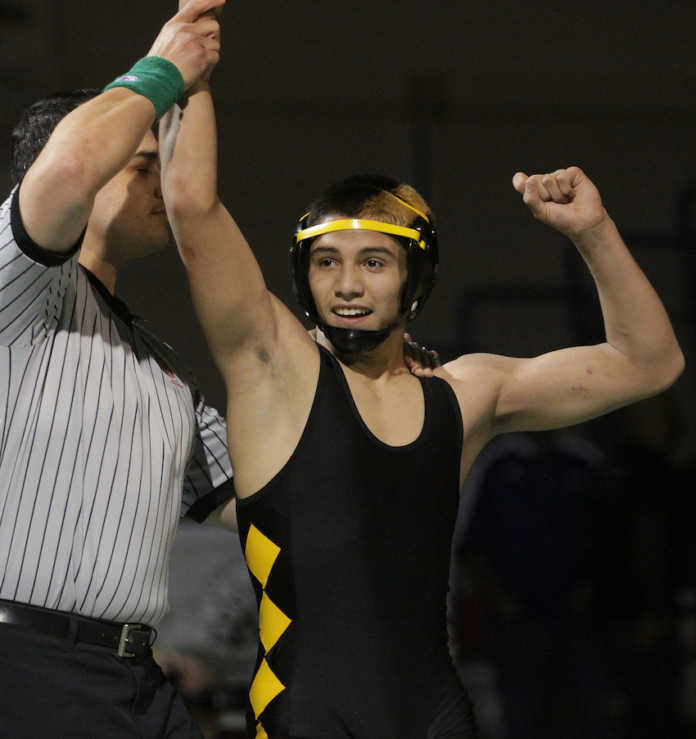 A Wildcatz wrestling historian of sorts, Pena knew that it had been a long time since someone wearing the black and gold singlet had their hand raised under the bright lights at Independence High.

Not since Emmanuel Lanuza and Robin Miranda in 2008, had a Watsonville wrestler captured a Central Coast Section championship.

But, again, Pena knew that.

A giant board in the Watsonville wrestling room emblazoned with the names of all the Wildcatz greats — league, CCS and state champions alike — served as his history teacher.

“I always looked at it and said, ‘my name’s going to be up there. Right there with my uncle,’” Pena said, referring to his uncle Nick, a 1999 CCS champion. “I decided to get it today.”

A year after being academically ineligible to compete at the high school level, Pena ended the Wildcatz’s nine-year drought on Saturday by beating Fremont’s Angelo Reyes by a 7-0 decision to win the CCS wrestling championship at 120 pounds.

The title was never in jeopardy, as Pena lived up to the No. 1 seed, cruising through the prelims with a pair of technical falls and pins. Things were a bit tougher against Reyes, the No. 2 seed, but a last-second takedown at the end of the first round gave Pena a 2-0 lead and the momentum heading into the second.

He all-but sealed the match midway through the second period by dragging Reyes back from the outskirts of the wrestling mat, where he was trying to split his way out of a takedown attempt. With the crowd oohing and ahhing at the seesaw battle on the edge of the mat, Pena held on to Reyes’ leg with all of his might and brought him to center, where he scored the takedown to go up 5-0 heading into the third.

He scored another takedown in the final stanza and surgically controlled the pace until he was crowned champ.

“It was pretty frustrating trying to pull him back in and get the takedown and him being able to splits right out of bounds,” Pena said. “I decided to bring him in and try to work him in the inside.”

Inspired by his uncle Nick, who was in the front row barking out orders during his match, to try wrestling, Pena has been on the mat ever since he walked into the Watsonville wrestling room and met now-retired head coach Gary Garcia.

“I just worked from there, kept it up and loved the sport,” Pena said.

Pena did not call it quits after failing to make grades his sophomore year and missing an entire season of wrestling. Instead, he refocused in the classroom and on the mat with hopes of becoming a section champion and finding a spot on a college team.

His work paid off on Saturday.

“It’s sweet that we have a champion,” said Watsonville head coach Josh Castillo. “With Abel being the underdog, being small, not making grades last year, coming back wrestling tough, I’m proud of him. He put in the work. Running night and day 10 miles to be ready for these moments. He’s earned it.”

The win was a throwback for the once-dominant Watsonville program, which produced yearly CCS placers and champions during the ‘80s and ‘90s. Pena and Castillo dragged Garcia out of retirement for Saturday night so that he could be on the sidelines when history was made.

“We had to end that nine-year drought,” said Garcia, who also coached Castillo during his 35 years with the Wildcatz before handing him the keys to the program in 2014. “That’s over.”

Pena said he doesn’t see why that’s out of the realm of possibility.

“I want to be at least a state placer,” Pena said. “I want to go out there and no matter what my ranking says I want to go earn a place.”

He is the lone local state qualifier.

His teammate, Mateo Montoya was fifth in the 113-pound division.