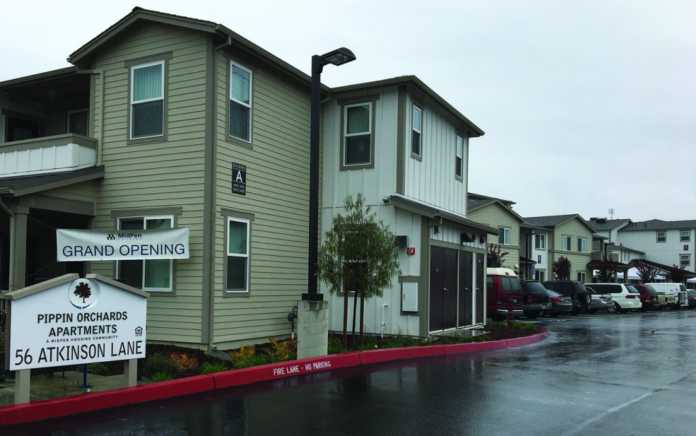 WATSONVILLE — When the Pippin Orchard Apartment complex at 56 Atkinson Lane was ready for occupancy in the fall, nearly 2,500 families applied, hoping to snag one of the 46 units.

“That’s an acceptance rate of less than two percent,” Lindenthal told a large crowd gathered Friday at the complex’s ribbon-cutting ceremony. “That means it’s harder to get into affordable housing here than it is to get into Yale, Harvard or Brown. That’s insane.”

Dozens of city and county officials, along with Pippin residents, took shelter under a series of tents to avoid a rainstorm that doused the area during the entirety of the ceremony.

Pippin Orchards provides three one-bedroom, 29 two-bedroom, and 14 three-bedroom apartment homes for individuals and families earning up to 60 percent of area median income, which is $66,960 for a four-person household.

Rents range from $628 to $1741 depending on how many bedrooms, number of residents and income level.

Six of the apartments are reserved for people with disabilities and their families, and two have been set-aside for young adults ages 18–24 who have experienced homelessness.

According to Lindenthal, 67 percent of the residents live or work in the Pajaro Valley. A total of five families were homeless before they moved in.

The complex includes a computer room for residents, and a small classroom for after-school activities – complete with an onsite teacher – for the 32 children who live there. There is also a small playground.

When the project was first planned, about half of the units sat in Watsonville city limits, while the others were located in unincorporated county land.

But the county’s piece was annexed into city boundaries, which several speakers at the ribbon-cutting ceremony attributed to a collaboration between jurisdictions.

“This project is a testament to the power of community partnerships and perseverance,” Watsonville City Manager Matt Huffaker said.

A lack of affordable housing, Huffaker said, poses a “major threat to the quality of life in our county.”

The project is the culmination of more than a decade of work, officials said Friday.

“After years of envisioning and planning, we’re thrilled to celebrate the grand opening of Pippin Orchards Apartments which provides high quality housing that our valued workforce can afford,” said Watsonville Mayor Francisco Estrada.