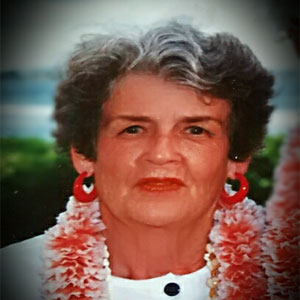 Clare Estelle Hazleton Powers-Pelich passed away at the age of 101 on February 27, 2017 in Santa Cruz, California. She was a longtime resident of San Jose, Gilroy and Santa Cruz.
Clare and her twin sister Clarice were born on December 11, 1915 in Pixley, California to George W. Hazleton and Grace E. (Hall) Hazleton. They were the youngest of eight children.
Clare’s family was an integral part of California history. Her father helped bring a large combine by mule train over Pacheco Pass in the late 1880’s when the pass was just a dirt trail. The successful crossing from Santa Clara Valley to Los Banos meant a new, shorter route eliminating the long trip around by way of Mission San Jose and Tracy. He also drove stagecoach to and from Shaver down the old Tollhouse grade.
Clare married Frank Powers in 1938. They had one son Robert Powers. She later married Mitchell Pelich in 1980, her high school sweetheart from the 1930’s.
She graduated from Watsonville High School and cosmetology school. She worked as a hairdresser and later as a seamstress. She also worked as a caregiver. In later years Clare spent hours contributing original photos and stories as far back as the 1800’s, providing invaluable family history to her relatives.
Clare was a determined, perceptive, remarkable woman. She took a genuine interest in her entire family. She had a way of making each family member feel special and loved.
She was the last surviving member of her immediate family. She was preceded in death by her parents George W. Hazleton and Grace E. Hazleton and her brothers and sisters, Forrest Hazleton, Essie Ziegler, Harold Hazleton, Ann Whiting, Elmerle Hazleton, George Hazleton and Clarice Leiser. Clare’s late husband Mitchell Pelich passed away in 2001, and her late stepdaughter Janet Pelich Justus Skillicorn passed away in 2010.
Clare is survived by her son Robert Powers and his wife Helen Rector, her stepson Tom Pelich and his wife Nancy, her stepdaughter Shirley Swindell and her husband Omen. Clare has many grandchildren, great-grandchildren and great-great-grandchildren, as well as many cousins, nieces and nephews.
A Memorial Service for Clare Pelich will be held at Oak Hill Memorial Park in San Jose on Saturday, April 29, 2017 at 11:00 a.m.