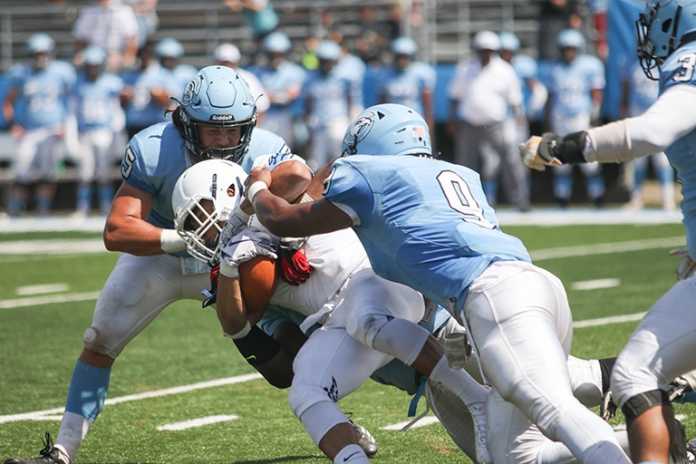 APTOS — Going into Saturday afternoon’s season opener, Cabrillo College coach Darren Arbet knew he had a notable set of players who he believes have the right attitude for not just playing but winning.

He called this year’s squad “special.”

“The players, the focus, they love playing football,” Arbet said. “The same way they played today, they practice just as hard. They’re competitive and I just love their attitude.”

The Seahawks began the season with a 31-7 thumping of Contra Costa College in non-conference play.

Cabrillo also got a chance to play on its shiny new field turf in front of about 100 fans at Carl Conelly Stadium,

The spectators were roasting under the 80-degree heat, but the Seahawks kept their cool and ran away with the victory thanks to a handful of explosive plays.

Cabrillo receiver Lorenzo McGill finished with two receptions good for 55 receiving yards and two touchdowns. He also racked up 59 yards on three punt returns, including a 43-yard return for a touchdown.

“Overall, I think we came in strong and we came out to pursuit and just get business done,” McGill said.

McGill, a freshman from Center High in Antelope, Calif., said the team came out extremely focused trying to get that season-opening win. It was the second straight year the Seahawks defeated the Comets in the season opener.

All aspects of the game were solid, including the special teams unit that opened some wide lanes during McGill’s punt return in the second quarter.

“I wanted to make sure the other punt returner made his block and I was just trying to get yards to get us in a good position,” McGill said. “Then I saw the open field and had to take one for the team.”

Arbet said teams at the junior college level tend to be young but he believes they have a great group that understands and loves the game. Cabrillo has 60 players on the roster, including 20 returners.

The offensive line is one of those young cores and is made up of nine players. The only returning lineman is sophomore Bryce Void, a 6-foot, 4-inch, 300 pounder of Athens Drive High in Raleigh, N.C.

“There’s going to be some growing pains but they played hard and they protected the quarterback. They opened up holes. I liked what they did,” Arbet said.

The Seahawks last year had the ninth-best defense in the state. They gave up an average of 18.8 points and 301.2 yards per game.

On Saturday, Cabrillo displayed that top-10 defense by holding the Comets to just 93 total yards — 129 passing yards and minus-33 rushing yards — and intercepted the ball twice.

“I think defensively we played really well,” Mitchell said. “Of course we had our bumps but as a unit we all communicated very well.”

Mitchell, who finished with three tackles in Saturday’s game, said they weren’t a bad group last season, but he believes this year’s team has meshed together quite well.

Mitchell, who is one of the defensive captains, said him and the rest of the captains talked about working on playing together as a single unit. He said the pieces of the puzzle were there last year and it was just one or two plays that derailed the season.

“We want a bowl game, we all want to get a scholarship and we all want to win this year,” Mitchell said. “Everyone really rallied around that idea really well and we’re a good unit.”

The Seahawks also have a list of local high school alumnis, such as quarterback Devon Daich of Monte Vista Christian, who completed 16-of-28 pass attempts for 227 yards with two touchdowns and an interception along with 26 rushing yards on 11 carries.

“Devon (Daich’s) a heck of a football player,” Arbet said. “So is Ryan (Kraft) and I thought they both played well from what I saw. I liked what they did today.”

Cabrillo College quarterback Devon Daich attempts a pass during the second half of Saturday’s non-conference game against Contra Costa. (Juan Reyes — The Pajaronian)

Barcelo had a six-yard run and finished with one reception for five yards, while Woodley made all four of his extra point attempts and he was 1-for-2 in field goal attempts (24 yards).

Arbet said bringing in local talent to the team was something he wanted to do with the coaching staff from the beginning.

“Hats off to the coaching staff, they did a tremendous job of recruiting and getting a lot of local players here to play for us,” Arbet said.

Arbet said there’s still some things to work on, such as cutting down on the penalties. The Seahawks finished with 23 penalties for 221 yards.

“We just have to be a little smarter,” Arbet said. “And that’s normal for a first game and our guys will get better.”

The Seahawks were held to just three points in the second half and Kraft threw two interceptions.

McGill said Contra Costa was capitalizing on their mistakes on communication, especially in the second half.

“You have to give Contra Costa credit,”Arbet said. “They made a couple of plays but I thought our defense stepped up and played really well today.”

Contra Costa quarterback Jaylen Tregle was 18-of-33 with a touchdown and the two interceptions.

Cory Riley and Herrington were each credited with a takeaway.

Arbet said the team came out flat in the second half and the warm temperature also played a bit of a factor into Saturday afternoon’s game.

Mitchell also mentioned they need to work on communicating routes on the defensive side and for him, maybe some extra conditioning.

“I got a little winded in the third quarter,” he said. “It’s just something I need to work on, keep that energy going. But overall, we played a great game.”

Next up, the Seahawks (1-0) will get an early break from the bye week but return on Sept. 21 to host Los Medanos at Carl Conelly Stadium at 1 p.m.

Mitchell said they’ll head into the film room later this week and see what they can work on for their next game.

Editor’s Note: This article will be published in the Sept. 13 edition of The Pajaronian.

Juan Reyes - August 11, 2022
Two local artists have teamed up to create a memorial sculpture honoring Watsonville residents who have died of Covid-19, and are asking for the... 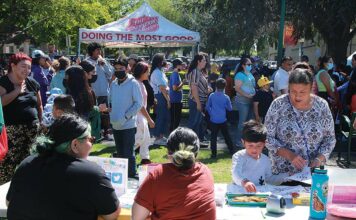