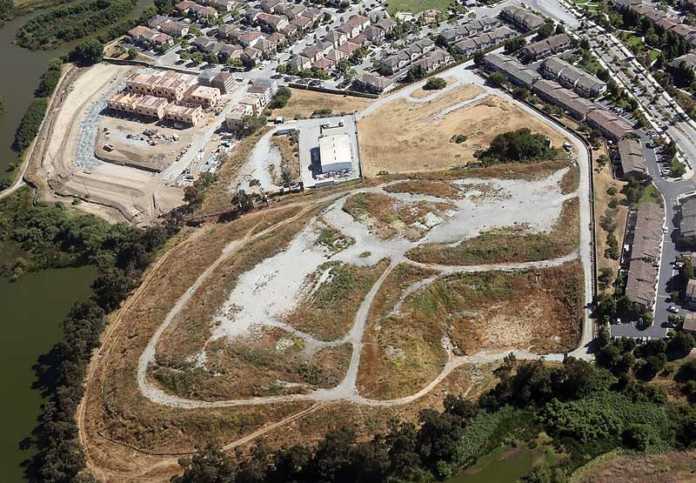 (This aerial photo shows the property off of Ohlone Parkway where a 150-unit housing project is slated for development. A separate 87-unit housing development, Sunshine Gardens, is shown under construction in the upper left. Photo by Tarmo Hannula/Pajaronian)

WATSONVILLE —  The Watsonville City Council voted to approve a 150-unit housing project off of Ohlone Parkway, despite opposition from a large contingent of neighbors, in a meeting that stretched into the early morning hours of Wednesday.

The council voted 5-1 in favor of the project, with Councilwoman Rebecca Garcia dissenting. Councilman Jimmy Dutra recused himself from the meeting, citing a conflict of interest, as he lives near the proposed development.

The site formerly housed a junkyard, which had been operating there since the 1960s. According to Principal Planner Justin Meek, the area was cleared of vehicles and structures in early 2017.

The Watsonville Planning Commission unanimously recommended the project on June 6.

The project was originally scheduled for consideration by the council on June 26, but was delayed after neighbors expressed their concerns.

At issue is the site’s primary access point, which will be built by extending Loma Vista Drive into the property. The access road will be carved through an existing lawn area and garden between two homes, which residents say is a frequent neighborhood gathering spot, such as for National Night Out.

Neighbors instead suggest using nearby Errington Road as the primary access point, a narrow road that extends behind Del Rio and Paraiso courts.

After the June 26 meeting, the city added a number of new conditions to the site, such as requiring the developer to use Errington Road as a secondary access point.

Del Rio Court resident Briana Bane said she was concerned about the traffic on the extended Loma Vista Drive.

“What’s upsetting me the most tonight, is that there is no negotiation for the other road,” she said. “You are about to bulldoze through our houses.”

Project architect Peter Silva said his team examined Errington Road, but determined that it is not “physically feasible.” At only 30 feet wide, it does not meet city standards for a two-way street, he said.

Even if it was widened, the intersection of Errington Road and Ohlone Parkway is still too narrow for fire trucks, Silva said.

“We have real significant restraints that we can not resolve,” he said.

Many neighbors who spoke during the hour-long public comment period said they weren’t against the overall project, they were just opposed to extending the road.

Seaview Ranch resident Della Herschbach Baker cited the nearby FedEx facility on the Manabe-Ow property, which has an access point from Loma Vista Drive, yet the primary entrance was constructed farther down on Ohlone Parkway after residents voiced their concerns years ago.

“I think there is a way to find better access,” she said. “That’s proven with the FedEx building. They found a way.”

Garcia made a motion to approve only the environmental impact report, while delaying approving the rest of the project until the council’s next meeting on Sept. 11.

City Manager Matt Huffaker said the added time would allow city staff to meet again with adjacent property owners and see if Errington Road could become the primary access street, but warned against giving “false hope” to the residents.

California Sunshine Development President Lisa Li said such a delay would “kill the project.”  After a two-year process, the developer received a permit from the County of Santa Cruz to remove the contaminated soil on the property, but it must do so by Dec. 16, she said, and such a task would take about three to four months to complete.

“As a developer, we cannot afford the capital costs of dragging it on that long,” she said. “We have explored the possibility of Errington Road; it is not possible. I don’t know what can be changed from now to the next meeting.”

Hernandez then made a motion to approve the project in its entirety, which passed 5-1, saying the project is for the “overall good of the community.”

Hurst agreed, adding the council needed to “rip the Band-Aid off” and approve it outright.

“I’m sorry the residents are going to be very disappointed about this,” he said. “There is no miracle, no Prince Charming coming to save us. This is it.”

ERIK CHALHOUB - June 29, 2022
WATSONVILLE—The Watsonville City Council at its Tuesday meeting signed off on an agreement with Pajaro Valley Arts for the sale of the historic Porter...