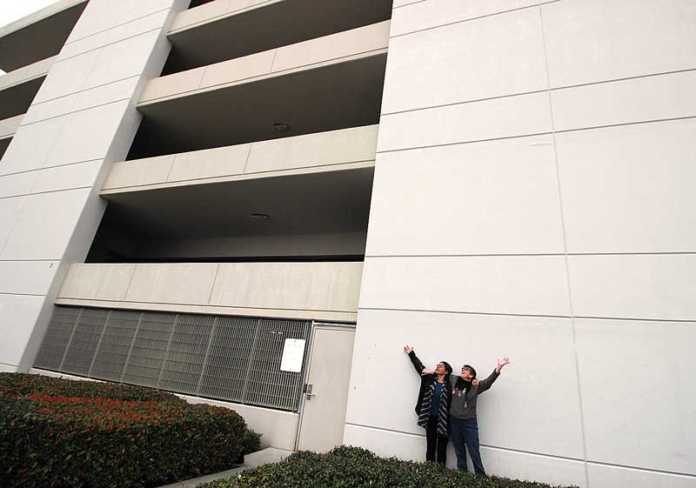 WATSONVILLE — Kathleen Crocetti has spearheaded 20 public art projects in Santa Cruz over the past decade, and her work has been shown throughout the country and seen by millions.

She recently received international recognition when her downtown Watsonville mosaic project, titled “Celebrating the Dignity of Labor,” was awarded the 2019 Best Community Project in the 18th Annual Mosaic Arts International Juried Exhibition, which is now showing at the Nashville Public Library Art Gallery in Tennessee.

Now, the Watsonville artist is about to embark on by far her largest project yet — and, it will only be a few blocks from her house.

The Watsonville City Council on Tuesday unanimously approved “Watsonville Brillante,” an ambitious project that will cover the entire exterior of the Civic Plaza parking garage with mosaic over a period of five years.

The project will install mosaic over 12,000 square feet of the six-story garage, divided up by 185 panels that measure eight feet wide by three-and-a-half feet tall. In addition, three large walls of the garage will also feature a single mosaic image.

In 2017, Crocetti, along with the help of numerous community members, completed “Celebrating the Dignity of Labor,” a series of 16 mosaic medallions embedded in the sidewalks along three intersections on Main Street in downtown Watsonville.

Each tiled medallion, placed in sequential order, represents a wave of immigrants Watsonville has seen over the years, and the work in which they were involved.

But Crocetti said the scope of the project was rather limiting, as it only focused on immigrants from the Ohlone to 1945.

“To me, this piece is really incomplete, because we ended it in 1945, and there’s been a lot of migration since then,” she said.

“Watsonville Brillante,” on the other hand, aims to represent mixed heritages, with each panel describing a different family group. Those panels will be arranged in a way that connects overlapping cultures, she said.

“This piece will also have historical significance, but I think it’s going to be more contemporary,” Crocetti said. “Who are we now? Who lives here?”

Crocetti, who was one of the 2016-2017 recipients of the Rydell Visual Arts Fellowship Program, said she traveled to Barcelona during that time and “immersed” herself in the work of the late architect Antoni Gaudi, inspiring her to create one large piece.

So, she started planning a large-scale project, and first looked in Santa Cruz, as she is a teacher for Santa Cruz City Schools. But, being a resident of Watsonville, she decided she wanted to take the project to South County.

Crocetti, who serves on the board of directors for the Arts Council Santa Cruz County, said the organization is pushing for equity across the county.

“South County has been short-shrifted in a lot of ways, especially in cultural opportunities,” she said.

Now, Crocetti said she will go to part-time in her Santa Cruz teacher position, and focus the rest of her time on Watsonville Brillante.

The council approved an agreement with Crocetti that will allow her to lease the Muzzio Park Community Center for $1 a year over five years. Crocetti said she will bring in students and other community members into the center to build the mosaics, and will also reach out to other local artists to draw the panel designs.

The city will also waive the estimated $10,500 building permit fees, and spend $60,000 to prepare the concrete service for installation through pressure washing and sandblasting.

Crocetti estimated the project will cost $1.5 million, and so far has raised $750,000 in donations. Rinaldi Tile of Watsonville will provide installation services, while Fireclay Tile of Aromas will donate the tile.

Public input for the designs will be gathered at various events over the summer, such as the weekly farmers market, and Crocetti expects the first mosaic installation to take place in spring 2020.

Crocetti added that the project will be a cost savings for the city in the long run, as the parking garage is due for a repaint every seven to 10 years.

“Mosaic surfacing of the building will actually provide a better quality, more resilient exterior to our garage than what we have now,” City Manager Matt Huffaker said.

“There are very few artists that will come up to the plate with close to $2 million in funding and not feature their own artwork,” she said. “She’s stepping up to the plate to feature Watsonville artists. It’s for the whole community.”

Watsonville resident Steve Trujillo said he’s known Crocetti for years, “and I’ve come to appreciate how much she has to give to this community.”

“This woman has vision,” he said. “She has vision for so many. She is such an asset to this community.”

Mayor Francisco Estrada said he hoped the project would inspire other artists to bring forward other projects in the city.

“I want other artists to know that Watsonville is for artists,” he said. “Anyone that wants to contribute to the city of Watsonville and its beauty is more than welcome to do so.”