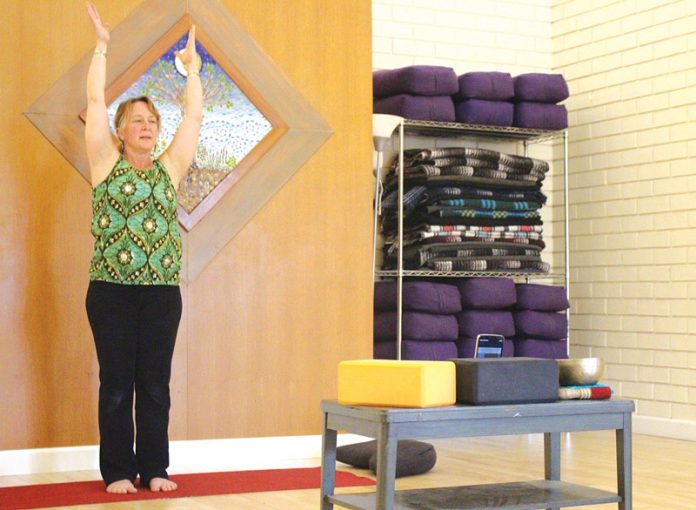 WATSONVILLE—As the second day of Santa Cruz County’s shelter-in-place order dawned Wednesday morning, Watsonville Yoga, Dance and Healing Arts owner Phoenix Artemisia was busy setting up for class—just not as she normally does.

Artemisia’s mat was unrolled on the ground of her studio on Main Street, angled in front of a small table that had her phone propped up on a yoga block, with a Tibetan singing bowl nearby. She was preparing for a livestream of her Beginning Yoga class.

“It’s so important… in situations like these, to find ways to stay calm,” Artemisia said. “To have some sort of normalcy. It’s a big comfort.”

Watsonville Yoga is one of many yoga studios across Santa Cruz County that are offering live streams of their scheduled yoga classes. The studios have gradually transitioned online the past week.

In Artemisia’s case, it was necessary to find a way for her students to have yoga available to them.

“Our community loves each other,” she said. “This is a way for them to come together… to keep that bit of a connection.”

Watsonville Yoga will be offering online classes free to the public, as well.

“Of course we ask if people can continue their memberships—this is a tough time for us as a small business,” she said. “We also know it’s a financial burden right now… and no one will be turned away. But if you can contribute, we’d really appreciate it.”

“I threw myself into it,” Mathews said. “For three days I did a crash course in all the technology. My friends and family helped—my husband has been doing troubleshooting. It’s been a steep learning curve… But it’s so worth it.”

Mathews said that a new introductory yoga class had started just three weeks ago, and that she was determined to keep it going.

“We have an amazing group of people who have been coming consistently,” she said. “That almost never happens with intro classes. I couldn’t stand to pull the rug out from under these people.”

Every teacher at Yoga Within will eventually have their classes online. Class fees will be lenient and on a sliding scale, as the instructors know how difficult things will be financially for a while.

Mathews said that so far, the “turnout” to the classes has been good—and that she has even had students from far away participating.

“If there is any silver lining to this strange situation we find ourselves in,” Mathews said, “it’s that I’m making connections with people from all over the world. My friends from Oakland, New Hampshire, even Denmark have logged on and taken my classes. It’s been amazing.”

Mathews said that yoga is something that nearly everyone can benefit from, especially in times of stress.

“We need yoga now more than ever,” Mathews said. “Not just my students, but me as well… seeing all these people I love. After my first class, I felt the best I had in 10 days.”

Artemisia had a similar sentiment.

“The world is quiet,” she said. “It can be an opportunity for transformation. We don’t have to let this be apocalyptic. This is a time to spend with loved ones… and to rethink how we take care of ourselves, too.”

Here are some other local studios offering live-streamed classes:

•DiviniTree Yoga will have online classes beginning this week.

Thriving among the giants