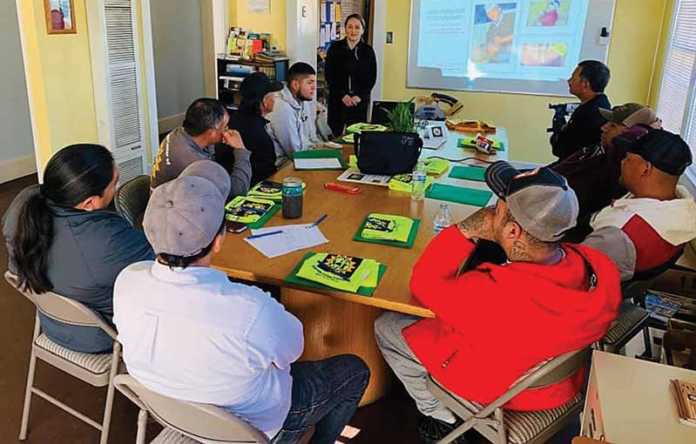 SANTA CRUZ — For about seven years, Sergio Donis had a job in Palo Alto before the long commute and two work-related accidents made him decide to find work closer to his Scotts Valley home.

That proved hard to do, and so like many people he began waiting in front of home improvement stores in hopes someone would hire him.

That left Donis, 53, jockeying for position every day among several other men hoping for a temporary job, in parking lots without shelter or restrooms.

When he found work, it was for whatever strangers happened to drive in to the parking lot.

But that changed when a friend told him about the Day Worker Center of Santa Cruz County. There, Donis waits for work inside a building that is laid out more like a comfortable house than a business.

“I like it because it’s a safe place to be for the customers and for us,” Donis said. “It’s been a good place since I found it.”

With the spring and summer yard work season approaching, organizers are hoping that more people will turn to the Day Worker Center when they need help.

Staff at the center serves as the middleman between hopeful workers and potential employers.

Workers live all over the county and come from around the world, from Russia to Iran to Mexico, from Venezuela to Germany to Honduras, said Employment Programs Director Maria Rodriguez-Castillo.

“They are the same people you see in the Home Depot parking lots,” she said. “Instead of that, they come here.”

The employers are people who need extra help with yard work, moving, painting and other heavy-lifting type tasks.

“Very often, homeowners don’t have the funds or the knowledge to connect with certified people,” Rodriguez-Castillo said. “They know how to do the work, they just need someone to come help them.”

When a worker comes to the center, they fill out an intake packet listing their skills, and receive a packet of papers with the organization’s rules and regulations.

Once a part of the program, they learn what is expected of them in a work ethics class, Rodriguez-Castillo said. But the education does not stop there.

To be a part of the program, workers must agree to provide volunteer maintenance and upkeep at the headquarters and at the adjacent cemetery, which helps boost their work skills, Rodriguez-Castillo said.

“And it helps them give back to their community,” she said.

The workers also help at the Day on the Beach event run by Shared Adventures, where disabled people have a chance to swim in the ocean.

Both workers and employers agree to a set rate of $18 per hour, which is paid at the end of every workday. This goes directly to the laborers.

The employer, in turn, is assured a qualified worker.

“We already screened that person, we already assessed that person,” Rodriguez-Castillo said. “And the workers know how much they will get paid, so there is no negotiating happening.

“And it’s important for the employers to know that we’re not going to send a stranger to their place.”

At the end of the job, the employers fill out survey cards rating the worker’s performance.

“We want to make sure we are performing, that expectations for the program are out there,” Rodriguez-Castillo said.

Paola Fernandez, who came to the center as a worker but now serves as job dispatcher and Family Services Specialist, called the Day Worker Center, “an essential part of the community.”

“It really provides that space for the day workers to be able to not only come and get day labor, but also gain skills through essential services,” she said. “That gives them the ability to go out in the community and perform to the best of their ability.”

For information or to hire a day worker to help with tasks such as landscaping, painting and moving, call 475-9675. For information, visit bit.ly/2TOIzHt.