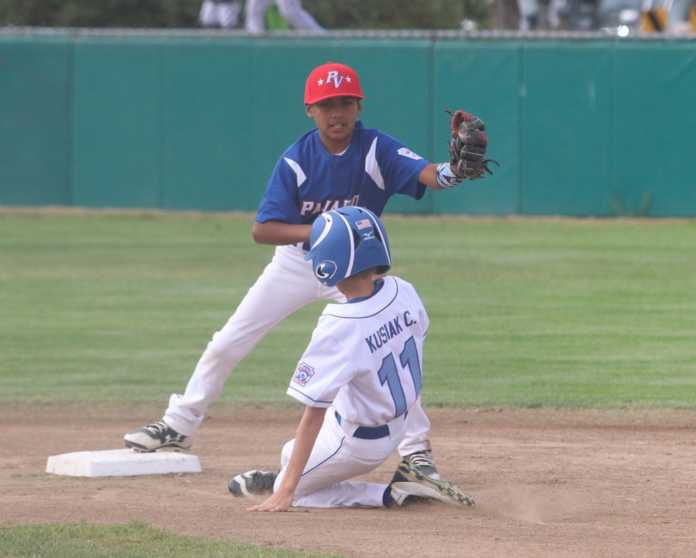 Aptos edged the Capitola-Soquel, 5-4, on Saturday at Scotts Valley to finish up its undefeated run to the District 39 Little League All-Stars Majors championship.

After winning all four of its games in pool play, Aptos continued its dominance in the final four double-elimination bracket by beating Capitola-Soquel and Pajaro Valley to earn a spot in Saturday’s final.

Capitola-Soquel edged Pajaro Valley on Thursday night in an elimination game, but couldn’t force a winner-take-all final in its rematch against Aptos, which will advance to the Section 5 tournament in Milpitas.

Pajaro Valley looked strong through pool play, winning three of four games, but ran out of gas in the final four.

Watsonville American, last year’s champion, won its last two games of pool play, but was on the outside looking in for the final four.

Scotts Valley lost a heartbreaker to Capitola-Soquel in the semifinals of the winner’s bracket, but rebounded with three straight wins, including two over Capitola-Soquel, to win the title. It beat Aptos, 12-2, on Thursday and thumped Capitola-Soquel in back-to-back games. The scores were 7-0 and 5-2.

Scotts Valley will participate in the Section 5 tournament at Harvey West Park in Santa Cruz.

Aptos and Pajaro Valley both won two games in pool play to earn a spot in the final four, but couldn’t complete their tournament with a title.

Watsonville American finished 2-2 in pool play, but did not move on to the final four.

Capitola-Soquel won three straight games in the final four portion of the tournament after an undefeated run through pool play.

Capitola-Soquel will represent D39 in the Section 5 tournament at Moreland Little League in San Jose.

Aptos advanced to the final four, but was eliminated by Live Oak in the semifinals of the loser’s bracket on Thursday. It finished 3-1 in pool play.

Watsonville American and Pajaro Valley both went 0-4 in pool play.

Pajaronian Staff Report - September 20, 2021
Two years ago Amy Thomas, principal at Watsonville Charter School of the Arts, noticed that her students were getting a bit restless during and...