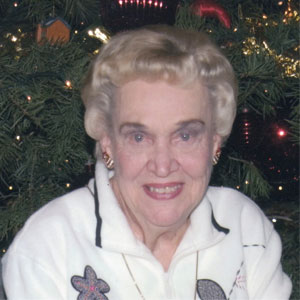 Watsonville – Doris Lorraine Beall of Watsonville died peacefully in her home on Wednesday, April 12, 2017.  She was 90.
Born July 3, 1926 in Oakland, California, she moved to Watsonville with her parents, Laurence Lee and Dorothy Mossbarger in 1931.  She attended Pajaro Elementary School and graduated from Watsonville High School in 1944.  During the War years, her father worked at Camp McQuaide in the canteen where she attended dances.  She also sang at the Cocoanut Grove.  After high school she attended San Jose State University where she majored in Business Administration.  While there she met Edwin S. Beall and they were married in January 1947.  Their first son, James Douglas Beall, was born in Watsonville in 1948, and their second son, Jeffrey Kenneth Beall was born in White Sands, New Mexico in 1951 after Edwin was called back into service with the Air Force during the Korean War.  They lived in San Jose for a short time where their youngest son, Courtney Glenn Beall, was born in 1955.  They moved to Belmont, California in 1957 and remained there until their three sons graduated high school.  In 1974 they returned to Watsonville, where Lorraine owned and operated Cabrillo Arms Apartments until she retired in 2001.
Lorraine was active in many organizations within her community.  She served as an elementary PTA president while her sons were in school, as Treasurer of the Watsonville High School Foundation, and as president of the Watsonville Community Hospital Service League, Soroptimist International of Watsonville (1986-87) and the Watsonville Woman’s Club (2002-03).  She served on the Pajaro Valley Chamber of Commerce and the Board of Directors of the Pajaro Valley Public Cemetery District, assisted her mother in getting the Rose Garden put in at the Santa Cruz County Fairgrounds, and was voted Woman of the Year in 1983.  It would be impossible to list every way she served her community.  Lorraine loved to play bridge and was active in the Dainty Dames, Welcome Wagon and other bridge clubs.
She was a loving wife, mother, grandmother and great-grandmother.  She was preceded in death by her husband, Edwin S. Beall.  She is survived by her sons, James Beall (Robyn), Jeff Beall (Carol), Corky Beall (Robin) and grandchildren Matt Fox, Erica Beall, Joey Beall, Dusty Osburn, Bobbi Beall and Jason Beall, and great-grandchildren, Shasta and Page Fox, Wyatt Beall and Owen Osburn.
A celebration of life will be held on May 13, 2017 from 1:00-3:00pm at the Corralitos Community Church, 26 Browns Valley Rd., Corralitos, California.  Lorraine requested that donations be made to the Shriners Hospitals for Children, 2900 N. Rocky Point Drive, Tampa FL 33607.