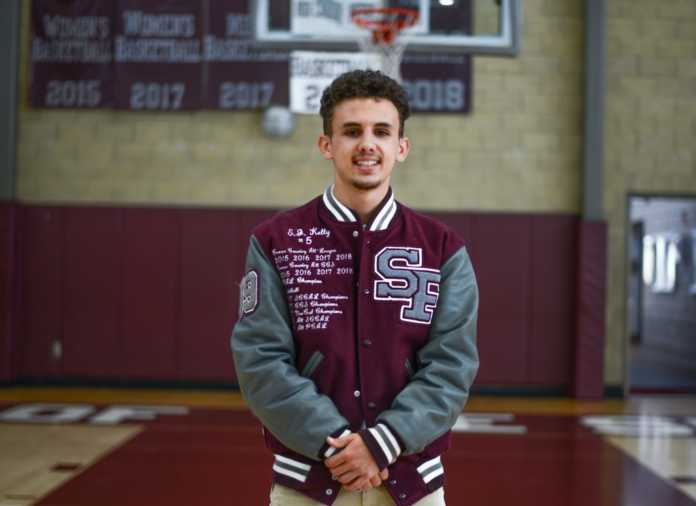 Kelly will receive a $1,000 scholarship after the committee announced he was recognized as this year’s top boys’ athlete.

Grace Bailey of Soquel High was named the girls’ top athlete and also received a $1,000 scholarship for her achievements.

“I think it’s really cool when organizations do scholarships like that for high school students heading out into college,” Kelly said. “In some sense it’s an investment back into the community.”

Four other student-athletes earned runner-up scholarships of $500, including Max Pepperdine of Aptos High.

“I’m truly honored to receive it after talking with the scholarship committee for a little bit and finding out even more than what I already knew about the scholarship and what it means,” he said.

Pepperdine said he talked to Sharon Richards, daughter of the late Wayne Richards. They spoke about the former teacher and coach at San Lorenzo Valley High who focused on life lessons while roaming the sidelines and dugout.

Pepperdine said Richards reminded him a lot of his grandfather, Richard White, who passed away in 2012.

“He was so familiar to my own grandfather,” Pepperdine said. “They both shared a lot of similar traits and being able to receive this award became even more special to me.”

To be considered for the scholarship applicants must be graduating seniors, maintain a 3.5 cumulative grade point average, submit two letters of recommendation and write an essay explaining how athletics have impacted their life.

Kelly — who was on the cross country and basketball teams — finished with a cumulative 4.53 grade point average. He beat out dozens of applicants from Santa Cruz County high schools to earn the scholarship.

“I’m sure I was up against a lot of great candidates,” Kelly said.

Kelly will attend Notre Dame in South Bend, Ind. in the fall. He will be a Gateway Scholar, meaning he will take classes at both Holy Cross and Notre Dame during his first two years in college before moving over to the latter for good. He hopes to major in business or film.

Pepperdine was a 4.2 grade point average student and named to the Santa Cruz Coast Athletic League First Team for basketball.

Pepperdine — who will attend Cal Poly, San Luis Obispo in the fall — was also a recipient of the Central Coast Section Scholar Athlete Scholarship along with three other ones for a total of $5,600 in scholarship money.

GIVING BACK TO THEIR COMMUNITIES

The scholarship wasn’t only about being academically and athletically talented. Applicants also had to showcase their impact in their communities.

Pepperdine spent hours with the Teen Kitchen Project at Aptos High, going one to two days a week for seven weeks.

The Teen Kitchen Project is a nonprofit organization that brings youngsters into a kitchen to learn to cook. The meals they prepare are delivered to individuals and families who are in crisis due to a life-threatening illness like cancer.

Pepperdine said it felt good to prepare meals for those who needed it the most.

“It was just helping prepare meals for those who aren’t always able to something on the table in front of them every day,” he said.

Pepperdine said it was an amazing experience to work with some special people in the kitchen and learn about cooking.

“It was really fun. I went into it hoping just to gain some skills around the kitchen before I head off to college and because my mom wanted me,” he said.

Kelly was ASB Executive President during his senior year and class president the past four years. He was also involved in numerous school activities, including being founder of the Film/Video club, which he started during his sophomore year.

“Being class president for four years was really cool,” he said. “I had an awesome class and I feel like I was able to do a lot with them. It was a good learning experience for me.”

Kelly said taking on both roles helped him build character and a lot of the skills translated over into other areas whether it was academics or athletics.

Over the last two summers, Kelly volunteered to work at Camp St. Francis, a summer camp for young boys in the community. He worked with campers as a group leader leading discussions and organizing activities.

Kelly said he hopes to return to the area and be able to use his education to reinvest back into the community.

“I’ll be able to go off and use this money towards my education and comeback and then kind of return that investment in a sense,” he said.

Editor’s Note: This article will be published in the July 5 edition of the Register-Pajaronian.