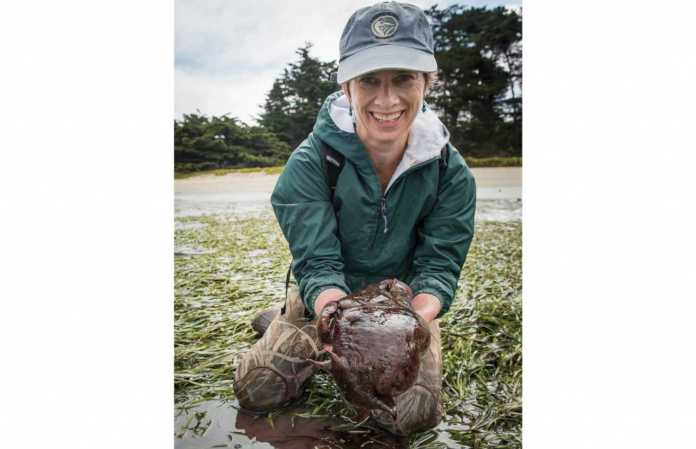 MOSS LANDING  — On Wednesday, Kerstin Wasson, Ph.D., Research Coordinator for the Elkhorn Slough National Estuarine Research Reserve, will receive the 2018 National Wetlands Award for Science Research, to be presented by the Environmental Law Institute in a ceremony at the U.S. Botanic Gardens in Washington, D.C.

The award recognizes Wasson’s commitment to the conservation and restoration of the nation’s wetlands.

“The recipients of the National Wetlands Awards are on the forefront of protecting wetland resources in the face of development and climate impacts,” said ELI President Scott Fulton. “Through their dedication and achievements, they inspire wetlands protection across the country and worldwide.”

For more than 18 years, Wasson has distinguished herself as a researcher, conservationist and mentor at the Elkhorn Slough Reserve — one of California’s few remaining coastal wetlands and the largest tract of tidal salt marsh south of San Francisco Bay — and as a leader of projects that span the network of National Estuarine Reserve Reserves.

“We have a secret weapon to help protect our nation’s estuaries — Kerstin Wasson,” said Elkhorn Slough Reserve Manager Dave Feliz. “She thinks deeply about estuarine issues, initiates and implements investigations into these issues, applies the findings toward solutions-based actions, and communicates all aspects of the process in an engaging and effective manner.”

With her counterpart from the Rhode Island National Estuarine Reserve, Wasson led a national assessment of salt marsh resilience to sea level rise, synthesizing consistently collected data from 15 Reserves in a publication that received national attention. Now Wasson and her colleagues are conducting replicated restoration experiments at eight of these Reserves to test strategies for enhancing salt marsh resilience in the face of climate change.