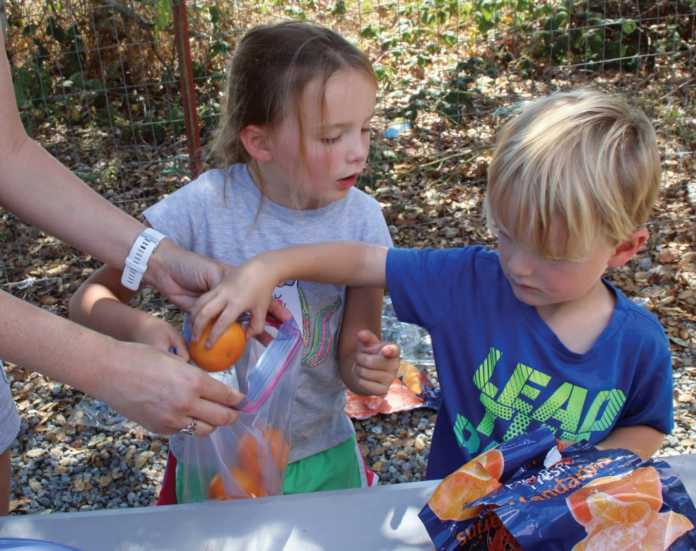 WATSONVILLE —In a gravel parking lot behind an apartment building in Watsonville, about 100 families lined up recently to receive an allotment of supplies that included food, baby items and household goods.

The families braved sweltering late-summer heat and waited in line for about an hour to get their much-needed items. But many of them live their lives facing far more insidious threats: poverty, coupled with arrest and deportation by immigration officials.

That’s why the distribution, and others like it that occur once a month, all happen at secret locations through the South County region.

The food and supplies come from private donations, and from Second Harvest Food Bank.

“They are terrified,” Lopez said. “They live in constant fear of ICE, and of their families being torn apart. It’s a reality that many people in our county don’t understand.”

Lopez said that the clandestine food distribution program, which has no official name, was created to serve the families that cannot afford to serve their families the food they harvest.

Living in “grinding poverty” on an average of $20,000 per year, many are forced to rely on non-nutritious, carbohydrate-heavy diets. Diabetes is a big cause of death, and the life expectancy is just 49, Lopez said.

They live in crowded situations and are regularly exposed to pesticides while on the job.

“We support farmworker families, and we try to inform the public about the really horrible difficult circumstances our neighbors live in every day,” Lopez said. “These people are desperate. It’s very sad.”

Lynn DeGroff, left, and Dave Bingham prepare baby goods to be given away to migrant families. — Todd Guild/The Pajaronian

Lopez said she decided she wanted to help about two years ago, when she visited a Oaxacan family whose young daughters, ages 2 and 4, were crying for food.

“I expected that someone would hand them something to eat, but no one did,” she said.

When Lopez looked in the family’s refrigerator, it was practically empty, she said.

“(The mother) said, ‘we’re not working and everyone is hungry,’” she said.

Lopez took the mother shopping, and called the Santa Cruz County Food Bank to get its help.

That day evolved into the once-a-month clandestine distributions, which are staffed by a group of volunteers.

“I’m here because I care about people,” said Scott DeGroff, who is part of Freedom Teams, a Christian-based organization with members from across the country.

“I’m a follower of Christ,” he said, adding that the biblical command to help less fortunate people is “like a mission” to the group.

“We view people as the most precious commodity on the planet,” DeGroff said.

A mother of four who asked to be anonymous said that her six days of work in the agricultural fields, which pays about $480 per week, goes entirely to pay rent. Nothing is leftover from her wages to buy food, she said.

“This helps a lot,” she said through a translator. “Everything is expensive.”

The woman added that she constantly worries about deportation.

“Any day our kids can be left with no parents,” she said.