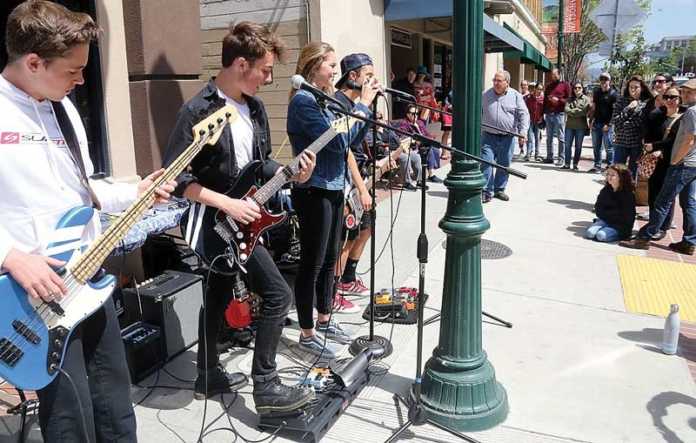 WATSONVILLE — The first-ever Wine, Beer & Art Walk took place in downtown Watsonville Saturday. The sold-out event drew at least 300 people to town for a taste of what the Pajaro Valley is about, from local wines, craft beers and non-alcoholic beverages to local businesses showcasing their wares and services in a casual, let’s get acquainted atmosphere.

Put on by the City of Watsonville and the Pajaro Valley Chamber of Commerce and Agriculture, the event also brought the public face-to-face with a variety of art and live music by local artists and musicians.

“I’ve never been to downtown Watsonville,” said Steve Bonner, who came to the event with his wife, Teresa, from Los Gatos. “I had no idea about the historic aspects of this place. I’ve always been curious and now I can see what great place this is. It’s a new adventure.”

City Councilwoman Nancy Bilicich, who showed up to lend a hand, said she was meeting people from out of town that were curious about the city.

“We’ve had people come in from Los Gatos and San Jose, people that just want a taste of what we have here,” she said. “Attendance has been good and people seem excited by this event.”

Indeed, packs of people set out around the Main Street corridor, after picking up their tote bag that included a walking map and a ticket book for all the venues.

“I am so happy with the turnout today,” said Deputy City Manager Tamara Vides. “It’s just great that we sold out and that there are so many people that want to learn about our city. We have a lot to offer.”

Tom Lopez of Santa Cruz said he found it “well worth the drive” to check out the event.

“I usually don’t drive out to Watsonville but this sounded pretty interesting,” he said. “I thought the photos in the ticket booklet were really helpful. I learned a lot about the downtown businesses and some of the cool history. There were a lot of businesses I never really knew about. We had a good time; it was worth it.”