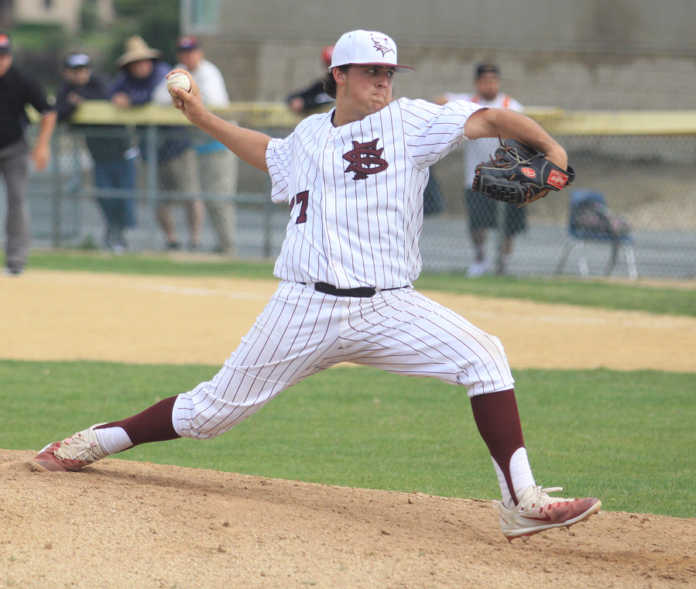 The Monte Vista Christian and St. Francis High baseball teams were scheduled to play on April 13 but the two Watsonville-based private schools never got to square off because of inclement weather.

It turns out the two will indeed get to play. Only this time, there will be a little more on the line.

No. 10 MVC will play at No. 7 St. Francis on Wednesday at 4 p.m. in the first round of the Central Coast Section Division II playoffs.

Along with MVC and St. Francis, Watsonville High and Aptos High also made the CCS postseason. Both teams are in the Division I bracket.

Both MVC and St. Francis squeaked into the playoffs with wins in their final regular season games.

MVC (11-12), which is making its second consecutive postseason appearance, edged Monterey High, 8-4, for the Monterey Bay League Gabilan division’s fifth and final playoff spot on Thursday night behind senior infielder Jackson Collins — he was 2-for-3 with a homer, four RBIs and two scored runs.

St. Francis (12-13) became CCS eligible — the Sharks had to finish either .500 overall or in Santa Cruz Coast Athletic League play — on Friday evening with a 13-4 win over Scotts Valley High.

Both teams have had up-and-down seasons but each has shown flashes of high-level play, beating several teams in the prestigious CCS Open Division like Santa Cruz High, San Benito High and San Lorenzo Valley High.

Watsonville was one of the final teams to make the playoffs as an at-large team despite producing a solid season. The Wildcatz, who are making their return to the playoffs after missing out last season, went 18-8 overall and finished third in the MBL-Pacific division behind playoff teams Alisal and Alvarez High.

Aptos (14-10-1) finished fifth in the SCCAL and lost a trio of heartbreakers in the closing weeks of the regular season, falling to The King’s Academy, Santa Cruz and St. Francis by a combined four runs.

Watsonville earned the No. 4 seed in the CCS Division I playoffs and will host No. 13 Santa Clara High on Wednesday at 4 p.m.

The Wildcatz finished second behind San Benito in their inaugural season in the brutally tough MBL-Gabilan division.

They have the best overall record (20-4) of any of the 16 teams and also hold the highest CCS ranking — they are No. 6, according to MaxPreps — in the Division I bracket.

Watsonville is looking for its first playoff win since the 2006-07 season.