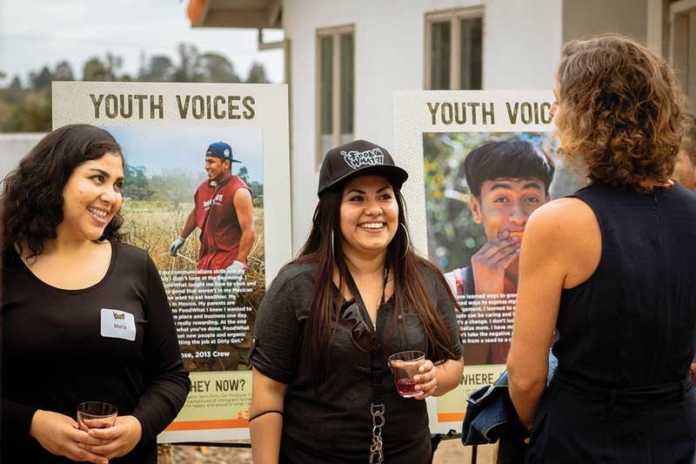 SANTA CRUZ — High school-aged youth from across Santa Cruz County, along with friends, family and other community members came together Sunday night to celebrate another year of growth.

Food, What?!, an organization which aims to serve local low-income and struggling youth through healthy, sustainable food and farming, held its annual benefit dinner at Santa Cruz Mission State Historic Park. The event is the nonprofit’s biggest fundraiser of the year and gives the community a chance to learn about the organization — as well as hear success stories.

“It’s really evolved over the years,” said Food, What?! founder and Executive Director Doron Comerchero. “It’s become just as much a celebration as a means of support.”

Close to 300 people attended the dinner, which was put on entirely by Food, What?! participants and staff. Youth worked with local chefs to create the meal, serve it, and assist with set up and clean up. Even most of the produce was grown by the students.

“If you think about it, it’s pretty notable for an event like this to be almost completely organized by young people,” Comerchero said. “They did an amazing job.”

But the standout moment of the night was when said youth took to the mic to share their own stories. Five young people spoke directly to the audience, explaining their personal journey and how Food, What?! helped them overcome challenges and grow.

One speaker told the audience about her mental health challenges and how the program helped her develop skills and confidence. Another spoke about their journey of coming out as trans, and the importance of having safe spaces like Food, What?!, where their pronouns were respected. One young woman explained how the organization helped completely change her diet — even inspiring her to start making healthy lunches for her and her friends at Watsonville High School.

“It’s a unique moment, where so many different parts of the community come together to truly sit down and listen to young people,” Comerchero said. “I think the impact is tremendous on everyone.”

ABOVE: Current Food, What?! participant Ashley shares her story with the crowd at Sunday’s benefit dinner. (Contributed Photo)

Food, What?! began in 2007 with five participants. This year, according to Comerchero, 70 youth participated in its core programs, with close to 800 others being involved through school events. The organization works from two separate locations — at UCSC and at Watsonville’s Live Earth Farm.

Comerchero made sure to give plenty of credit to his Food, What?! staff at Sunday’s dinner.

“It’s an opportunity to share with guests what a talented group of people I work with,” he said. “Each person plays a key role in these youths’ experience.”

For information on Food, What?! and to donate to the organization, visit foodwhat.org.

Destroyed Highway 1 in Big Sur could reopen by summer

Destroyed Highway 1 in Big Sur could reopen by summer