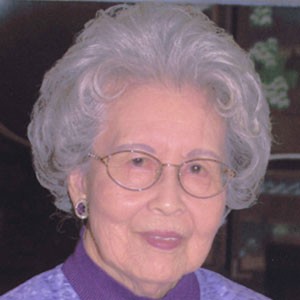 Watsonville resident Frances Goon passed away at the age of 98 in her home on the morning of December 1, 2017.

Born in San Francisco in January of 1919 to William and Young Shee Jang, she was the eldest of eight children. She spent her childhood in San Francisco’s Chinatown, attending Commodore Stockton School, until her family moved to Watsonville and then to Salinas, where she graduated from Salinas High School and attended Hartnell College. Helping in her father’s store at that time, she learned about the retail business, which would serve her well for the next 50 years.

Frances returned to Watsonville when she married Harry Chin Goon in 1941. Together they worked in the retail and apple drying businesses and raised a family. After the death of her husband in 1964, she went to work full time as part owner of G.B. Family Wear and Salinas Department Store. She retired in the early 1980s, allowing her to devote more time to her interests of cooking Chinese delicacies, gardening, and quilting, often sharing the results of those activities with others. She participated in the quilting group at the United Methodist Church, was active in the JACL Senior Center, Salinas Senior Center, and the Watsonville Chinese Community Association until she became visually impaired.

Frances enjoyed spending time with family and friends, whether at parties, get-togethers she hosted, or over a cup of tea. She loved watching her grandson grow up and seeing his accomplishments. She was respected for the wisdom she shared from her life experiences and her practical knowledge. Her children learned from the examples of her integrity and perseverance. Though dealing with the inevitable pains of aging, she maintained her generosity, resiliency, and mental acuity until her passing.

She is survived by her children Doris Goon, Alan Goon, and Janet Hohl (David); grandson Chris Hohl; sisters Ruby, Virginia and Helen; and many nieces and nephews and their families. A private service has been held. Mehl’s Colonial Chapel was entrusted with the arrangements.

For those wishing to make a donation in her memory, the Pajaro Valley Historical Association and Pajaro Valley Community Health Trust are suggested.