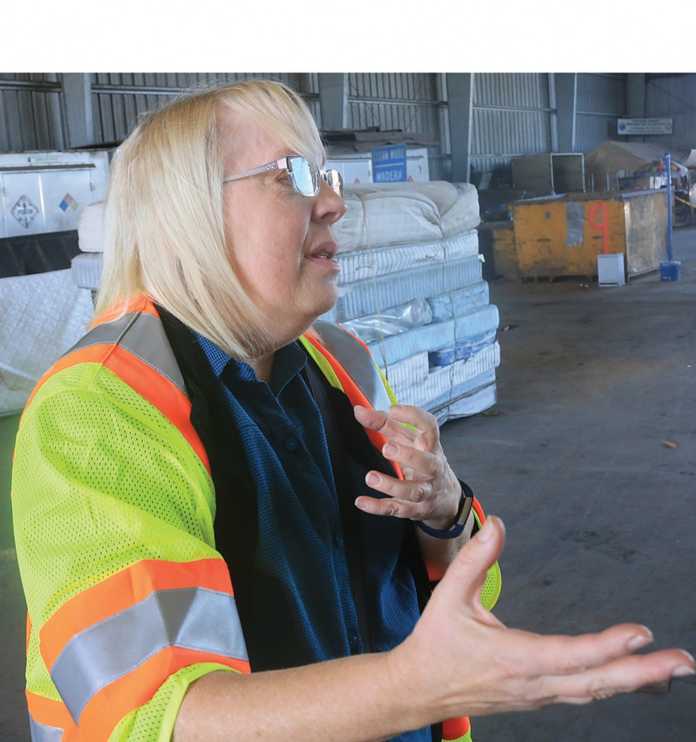 WATSONVILLE — Nancy Lockwood, former solid waste division manager for the City of Watsonville, who helped create the 6.5-mile slough-wetland trail system and shape the bulk of the city’s progressive environmental direction, died Saturday in her Watsonville home. She was 62.

Lockwood had been battling a resurgence of cancer since October, said her “sister by choice,” Suzanne Williams.

Born in Summit, New Jersey, she grew up on the East Coast. Lockwood earned a Master’s Degree in Public Health from San Jose State University and then worked for the City of Watsonville for 27 years in Public Works and Utilities. Her main focus was on educating the community in saving water, recycling and less toxic home care. She was a key player in the creation of the Watsonville Nature Center at Ramsay Park and the slough-wetland trail system.

Templeton said Lockwood was her boss for about five years and then they were peers for a number of years.

“She was so talented in outreach education and environmental policy changes and had a real eye for how to streamline things and get people to work together; she connected a lot of people in partner organizations,” Templeton said.

Templeton added that Lockwood had a style of making people “want to collaborate with her.”

“She was so inclusive,” Templeton said. “She had thoroughness about how she tackled situations. Nancy was a master facilitator and good at conflict resolution. She was very easy to work with. Finding a way to get things done within the means was her specialty.”

Lockwood initially came to Watsonville to do recycling and changed the face of that department, Templeton said. One of her latest missions was exploring organic food scraps recycling.

“Every program she developed – or was a part of – was designed to be long-term sustainable,” she said. “The plastic bag ban she single-handedly pushed for in Watsonville was the first in the state. She was instrumental in banning Styrofoam in stores: Things like this make Watsonville a leader.”

The recent plastic ban legislation, which was approved June 25 by the City Council, was also one of Lockwood’s missions.

“Nancy texted me during that meeting and asked me how it was going; she was just thrilled: This was trailblazing set by Nancy,” Templeton said. “Not only was she was my professional mentor, she helped me through early parenting stages and counseled me on buying a home; we were really close; she really felt like a big sister to me.”

Marcella Tavantzis, who worked for the City alongside Lockwood for years, said, “She was one of the kindest and most caring people. She loved everyone, she loved the planet, the environment, and never had a bad word, and never had a frown.”

Tavantzis said she was at Lockwood’s side at her Old Smith Road home when she died. Denise Beld, Williams and Tavantzis had been caring for Lockwood since October.

“I gave her the last meal she had,” Tavantzis said. “Her spirits were up even though she knew she couldn’t make it. She had a smile. She wanted to believe the chemo would help her. Nancy wanted us to promise to take care of her.”

In a curious side note, Tavantzis said Lockwood collected early day eggbeaters as a hobby and had more than 100 of them.

“I gave her an egg beater I found in an antique store once,” Tavantzis said. “But when I was at her house one day I noticed she 20 just like the one I gave her and she never once said, ‘oh, I have ones just like it.’ When I gave it to her she was all excited and surprised; that’s just who she was.”

Tavantzis, who is retired, said she worked with Lockwood in Public Works and that “we became friends right away.”

Williams was at Lockwood’s country home Wednesday helping to break down the estate.

“Nancy may not be here in body but she is here in soul,” she said. “She sits beside me, she takes walks with me, she works in the garden with me and she provides TLC to cats with me. I feel her close at hand. I think of her every time I pass through Watsonville. She told me her favorite song was ‘Inch By Inch’ and at her retirement party they played an adaption of ‘Leaving on a Jet Plane.’”

“She just had great patience and tenacity and always seemed to help us move forward and address the next challenge,” Koch said. “We never would’ve gotten so far advanced in environmental areas without her talent and tireless efforts and professionalism.”

A celebration of Nancy’s life will be held in Watsonville on July 21 from 1-4 p.m.

Donate >> Donations can be made online at cfscc.org. Checks should be made payable to Community Foundation Santa Cruz County with a note on the memo line directing it to the Nancy Lockwood Fund. Checks can be mailed to 7807 Soquel Drive, Aptos, CA 95003. The Community Foundation also accepts gifts of publicly traded securities. For information, call Robin Larsen, 662-2061, or email at [email protected].

Editor’s Note: This article will publish in the July 5 edition of the Register-Pajaronian.