REDWOOD CITY–The Aptos High girls’ basketball team has relied on its defense throughout the season.

It helped them get the Central Coast Section championship game for the fourth straight season.

And it made Saturday’s CCS Division III final a no contest.

The Mariners smothered Mills High, 57-30, to repeat as CCS champions and notch their third section title in the last four years.

Aptos 6-foot-1 senior forward Natalia Ackerman recorded a double-double as she led with a game-high 15 points and 11 rebounds.

“There’s no other emotion, this is incredible,” Ackerman said. “Getting three CCS championships in four years, it’s unbelievable.”

Fellow senior Gabby Giuffre had seven points, three assists and three rebounds for Aptos (25-4), which has not lost since January.

Bruce Funk, a first-year coach at Aptos, said he was happy they got a chance to defend their title and believes they’re a better team than last year.

“It all starts on the defensive end,” he said. “They’ve really upped their intensity since playoffs have started and I think every game has shown that.”

The Mariners held opponents to 37 points per game in the playoffs. Ackerman said she felt confident the entire game, especially after an 8-0 run to start the game.

“I think the pressure and effort we gave tonight definitely was our star,” Ackerman said.

Guiffre, a 5-foot-11 guard who will play for University of San Diego next year, was the leader of the Mariners’ greedy and unrelenting defense that held underdog Mills (16-11) to 10 points or less in each quarter.

The Mariners held the Vikings to just four points in the third and led by as many as 25 points.

“We just had to go out and play hard and we did that,” Giuffre said. “[Mills] got here for a reason, they’re going to make runs and they’re going to do what they can do… but, all in all, we did what we needed to do to pull off that win.”

Funk’s defensive system isn’t complicated but it was effective.

“Never giving them a chance to breathe and just keep coming even if you get beat,” he said. “The next time down you’re right back in their face.”

Aptos had won just one CCS championship–a D-II title in 1982-83–before Ackerman and Giuffre stepped on the plush campus nestled into the Santa Cruz County hills as bright-eyed and bushy-tailed freshmen.

They also had not won a league title since the 2000-01 season. The Mariners have won the past three.

Ackerman, who will play at Cal Poly-San Luis Obispo next year, said this group has relied on each other and has felt connected since the start of the season.

“We just always boost each other up,” she said.

Jasmine Ackerman along with twin sisters Madison and Emma Stefanini scored nine points each for the Mariners, who earned the No. 8 seed in the CIF NorCal Division III State Playoffs.

They’ll host No. 9 Vista del Lago High of Folsom on Tuesday at 7 p.m. 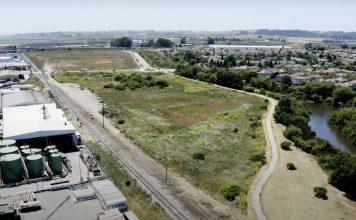