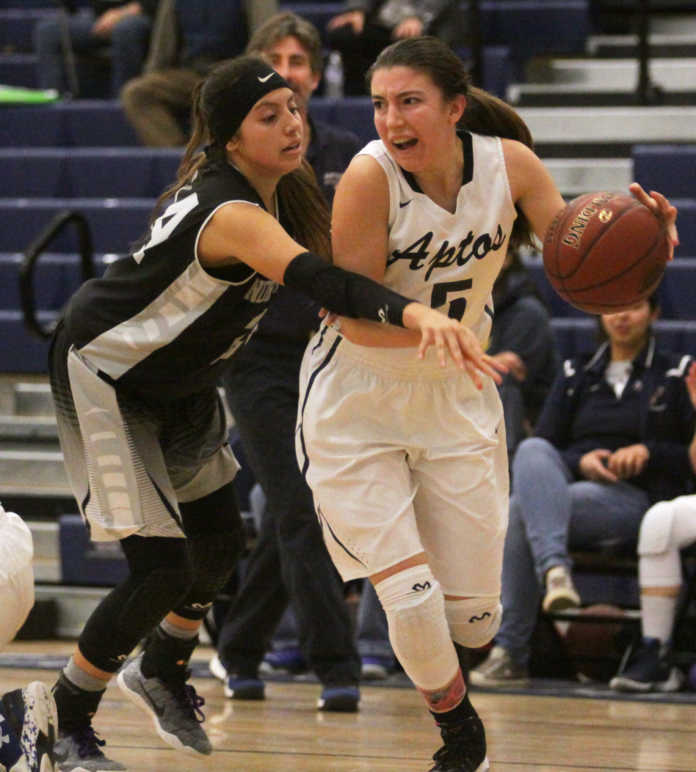 Michael Jackson and the Police were at the top of the charts, Al Pacino was asking people to say hello to his little friend and Dan Gruber was guiding the Aptos Mariners girl’s basketball team to its first and only Central Coast Section championship.

More than 30 years later third-year head coach Stefan Hocom and his youthful Mariners are trying to recapture the same magic.

They took their first step toward their goal on Thursday.

Four players scored in double figures for the No. 5-seeded Mariners in their 75-50 romp over unseeded North Monterey County to advance to Saturday’s CCS Division III quarterfinals.

They will travel over the hill to face No. 4 Mills, the host of the D-III quarterfinals, at 4:30 p.m.

Hocom, who has watched plenty of film on the defense-first Vikings, said it will be the biggest challenge the Mariners, who have not advanced to the CCS semifinals since 2002, have faced all season.

“If we win this next game it’s going to be bigger than anything we’ve done all season,” Hocom said, noting impressive wins over Santa Cruz Coast Athletic League champ Soquel and Monterey Bay League Gabilan division champ North Salinas. “We all know beating North Salinas earlier in the year was kind of like slaying the giant. This is going to be one of those games for us. We’ll run the girls, play hard and see what happens.”

Thursday served as a nice confidence boost heading into Saturday.

Powered by its full-court press defense, Aptos (23-4) forced 15 North Monterey County (13-13) turnovers in the first quarter and made the Condors pay on the other end, finishing a majority of them with quick transition buckets.

The Mariners led 29-13 after the first and kept their 16-point advantage heading into the break before storming out of the locker room to push their lead to 30 at the end of the third.

Freshman center Natalia Ackerman and Giuffre each scored 16 points, sophomore guard Hannah Hocom, Stefan’s daughter, added 15 points and senior guard Teal Maixner chimed in with 12 for the Mariners, who played unselfish basketball and made the extra pass on almost every possession leading to easy looks around the rim. Nine of 12 players scored for Aptos.

North Monterey County was fresh off notching its first CCS playoff win since 2010, knocking off No. 12 Del Mar in overtime on Tuesday, and came out firing and fearless. Senior point guard Amanda Torrez opened up the game by swishing a 3-pointer and junior center Jocelyn Cazarez buoyed the Condors through the rest of the period, scoring 10 of her 16 points over the first eight minutes.

The Condors hung around until Torrez ran into foul trouble midway through the first. Without her handling the ball the Mariners’ physical press defense smothered North Monterey County into submission.

“Today’s game was a tough one,” Torrez said. “We knew it was going to be a big challenge but we played our hearts out and that’s all the matters.”

Torrez, who finished with 13 points in her final game for North Monterey County, returned to the court late in the second quarter but it was too late for the Condors to stage a comeback.

Freshman wing Rebecca Castro added 12 points and provided a spark off the bench, showing glimpses of her scoring ability that helped the Condors shrug off three straight losses and take second in the MBL Pacific division. But the Mariners had an answer for every run North Monterey County threw their way.

“We had our rough spots here and there but I’m proud of my team,” Torrez said.

Thursday was the Mariners’ first time back on the court after their heartbreaking loss to Soquel in last week’s SCCAL tournament championship game.

They showed zero rust and said they made very few adjustments after the loss, which snapped their eight-game win streak.

“We just got back to what we do and worked on a few things,” Stefan Hocom said. “Nothing special tonight.”

Come Saturday, however, coach Hocom said he plans to make adjustments on the fly, according to what he sees from the Vikings, who will have had more than a week off since their last game.

The Mariners said they know they will be the underdog when they step foot in the gym but said they will enjoy the shot at history after years of being on the outside of the playoffs looking in.

“We know more than anyone how Aptos girl’s basketball has been down lately and we’re just excited that we’re the ones that are turning it around,” Hannah Hocom said.