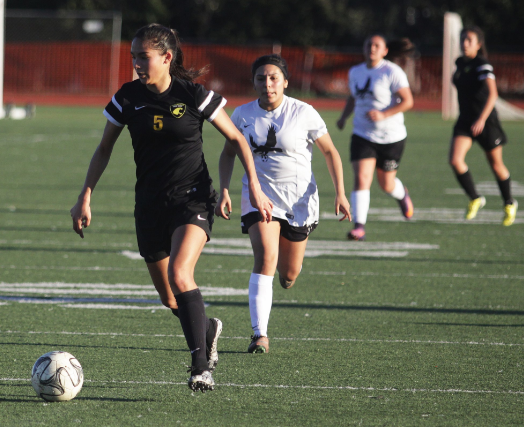 Head coach Gladys Mondragon is happy they did.

“Naturally, they took the leadership of the team,” the coach said. “We didn’t make them do it. They slowly took it over.”

And they were great in the roles, leading Watsonville to the Monterey Bay League Pacific division championship — the Wildcatz’s first league title since the 2011-12 season — and the Central Coast Section playoffs.

On Wednesday, they added another accomplishment to their long list.

Felix, a high-scoring striker, was named the MBL-P’s Player of the Year and Robledo, an athletic Swiss Army Knife, earned the league’s Offensive MVP.

Watsonville led the MBL-P in First and Second Team selections (8). Ina Gonzalez and Rachel Perez earned a spot on the First Team with Felix and Robledo, while Annah Ramirez, Jennifer Escoto, Zuli Alcantar and Shaniah Rocha made the Second Team.

But Felix and Robledo stood above the rest, according to the coaches from around the league.

“I don’t really know how to describe the feeling,” said Felix, who explained that Mondragon surprised her at the team’s March 10 banquet with the POTY honor. “I was really happy. It helped me realize what I can do. It meant a lot to me. It meant that I had met my goals.”

And she scored plenty of them, too.

Felix finished the year with 25 goals, which was more than enough to lead the league in scoring and second only to Soledad’s Belinda Ascencio (48 goals), who will play Division I soccer at UC Santa Barbara next season, when compared to other strikers along the Monterey Bay.

“You could see it in her eyes at the beginning of the season — she had a focus about her,” Mondragon said. “She wanted it and I think that’s why she had so much success.”

Felix said her time in the summer spent with the Olympic Development Program’s NorCal team gave her invaluable experience. She traveled with 17 other girls from the region to Arizona to play against some of the best players from around the country.

“It showed me what college would be like — the competition was tough over there,” said Felix, who will focus in and make her decision on which college program she wants to play for over the summer. “I took what I learned and I tried to bring it to my teammates.”

Watsonville finished the league season with a 9-1-1 standing and at 11-4-4 overall.

Robledo also had plenty to do with the Wildcatz’s success, playing multiple positions for Mondragon throughout the season. She had the magical touch, powerful boot and much-needed toughness, too.

“You put the ball at her feet and she can do some special things,” Mondragon said. “She’s a natural player. She can player any position, from goalie to striker. She can do anything she wants out there.”

It was a common sight to see Robledo fit in a perfect pass to Felix, leading her to a wide-open goal. The two have played on the same team the last seven years and the connection was easy to see this season.

“We just get each other,” said Robledo, whose family, including her mom, has played soccer at Watsonville for generations.

North Monterey County junior Marcella Gudiel was named the MBL-P’s Defensive MVP for helping the Condors to a fourth-place finish.

“She’s just so strong,” Robledo said. “She goes in with everything she has and tries to separate you from the ball. She’s the toughest defender we faced.”

Seaside’s Meleseini Moala was named the MBL-P’s top goalie, North Salinas’ Sophia Camacho won the Newcomer of the Year and Pajaro Valley’s Jasmine Paniagua was given the Pursuing Victory with Honor award.